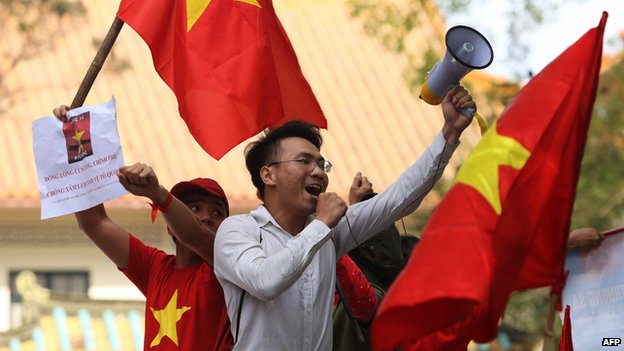 After a state-owned Chinese oil company towed a rig into disputed waters in the South China Sea on May 2, an ongoing standoff between dozens of Chinese vessels and Vietnamese naval ships began. The maritime standoff sparked anti-Chinese sentiment on the Vietnamese shore, leading thousands to riot, burning and looting in industrial parks outside of Ho Chi Minh city on May 12 and 13. Xinhua has reported that two Chinese nationals were killed in the riots, and close to 100 more injured. A recent censorship directive from Chinese authorities, leaked online and translated by CDT, has instructed mainland media to take Xinhua’s lead when reporting on the situation in Vietnam:

All reports regarding the projects and situation of Chinese firms in Vietnam that have been violently attacked must only use Xinhua wire copy and information from the Ministry of Foreign Affairs official website. Outlets must not publish or broadcast independently collected material, re-publish foreign media reports, or organize commentary without permission. Strictly manage interactive links and news posts. (May 15, 2014)

Instructions to censor news about the confrontation of Chinese and Vietnamese ships were earlier issued, as were orders not to cover the riots as they were underway. The Washington Post has posted video footage of the riots:

While rioters were looking to target factories owned by Chinese firms, they also hit plants representing other countries, which could discourage foreign investment in the nation. The Wall Street Journal reports:

[…] Although the riots were inflamed by anti-Chinese sentiment, companies from a Malaysian furniture maker to a Taiwanese apparel maker said Thursday that their businesses had been swept up in collateral damage. Some said they think their companies were mistaken for Chinese, while others said demonstrators seemed carried away by the emotion of the moment.

Taiwanese manufacturers in Vietnam are particularly hard hit, with at least 200 factories looted or burned down, the Taiwanese government said Thursday.

At least 10 Japanese factories also suffered damage to their facilities including broken windows and security cameras, the Japanese Business Association of Ho Chi Minh City reported. Isao Obayashi, secretary-general of the association, said it is telling its 703 members to “display the rising sun flag so they would be recognized as Japanese companies.”

China is itself Vietnam’s largest trading partner, and the Guardian reports that Chinese state media has issued warnings of economic repercussions. With anti-Chinese sentiment remaining high in Vietnam, many Chinese nationals living in the Southeast Asian nation are fleeing for neighboring Cambodia. The Guardian reports:

Cambodia said hundreds of Chinese nationals had poured across the border from Vietnam to escape the riots.

The New York Times’ coverage of the protests gives in-depth background on long-running territorial disputes in the South China Sea, notes the challenge that the violent protests pose for the Vietnamese government, and provides a map showing disputing claims in the maritime region:

The recent moves by China — covering an area that stretches from Indonesia north to Japan — are part of what analysts see as an effort to create “facts” in the waters that leave China’s less powerful neighbors with few good options for pushing back. Taken together, the actions escalate a longstanding battle that has only deepened with China’s military and economic rise.

In Vietnam, the focus of anger was China’s decision to deploy an oil rig escorted by a flotilla of coast guard and other ships off the Vietnamese coast despite promises to settle territorial disputes by diplomacy.

“It’s just this witches’ brew of aggrievement and nationalism,” Jonathan D. Pollack, who focuses on Asia at the Brookings Institution in Washington, said of the increasingly dangerous contests for control of the South China and East China Seas. “The only option is some sort of move toward shared development, but no one seems to be in the mood for that.”

[…]Although Vietnam has been vehement in its opposition to the drilling rig and has in the past loosened tethers on anti-China sentiments, the protests pose a challenge for the authoritarian government, which is wary of unrest that could veer into calls for democracy and eager to maintain good relations with investors. [Source]

Vietnam’s prime minister has reportedly sent text messages to millions of citizens urging them to refrain from violence, but to also “defend the fatherland’s sacred sovereignty.” From NPR.

Vietnam’s prime minister has sent a text message to millions of Vietnamese urging them to boost their patriotism to “defend the fatherland’s sacred sovereignty” but not to engage in violence.

The message that was sent late Thursday and into Friday to subscribers of the country’s cell phone operators didn’t directly condemn the riots that have broken out this week following China’s decision to deploy an oil rig in disputed waters off Vietnam on May 1. [Source]

In 2012, Chinese authorities allowed large-scale anti-Japanese protests, which likewise turned violent, after Sino-Japanese tensions were enflamed by Japan’s nationalization of the disputed Diaoyu Islands in the East China Sea. For more on maritime disputes and nationalism, see prior CDT coverage.