China to Extend Over $12 Bln in Aid to Africa 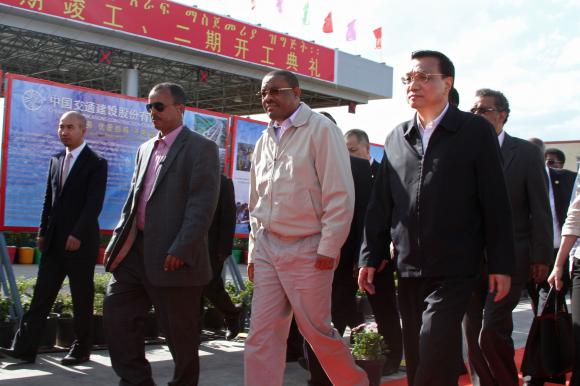 Reuters reports that on Monday, during his trip to Africa, Premier Li Keqiang unveiled an extra $12 billion in aid and offered to “share advanced technology with the continent to help with development of high-speed rail,” a move that CCTV notes one African scholar upholds:

Li pledged the additional funding in a speech at the Organisation of African Union headquarters in the Ethiopian capital, Addis Ababa.

China will increase credit lines to Africa by $10 billion and will boost the China-Africa Development Fund by $2 billion, bringing it to a total of $5 billion, Li said, according to the official Xinhua news agency. He provided no details of the timeframe.

Li “depicted a dream that all African capitals are connected with high-speed rail, so as to boost pan-African communication and development,” the report said. As China has advanced technologies in this area, Li said China was ready to work with Africa “to make this dream come true”.

China will also offer $10 million in aid for wildlife protection, Li added, for a part of the world where the Chinese appetite ivory and rhino horns have driven some species to the brink of extinction.

It is Li’s first visit to Africa since he became premier last year, and follows on from a trip to the continent by President Xi Jinping in March 2013, when he renewed an offer of $20 billion in loans to Africa between 2013 and 2015. [Source]

An editorial from The South China Morning Post encourages readers to avoid likening China with other colonial powers which have dominated the region:

China and Africa are well suited for one another. African development is being held back by a lack of infrastructure and Chinese firms have a proven track record in building power, communications and transport networks. Premier Li Keqiang’s offer of Chinese assistance to link the continent’s capitals with high-speed railways would improve opportunities and growth potential. Such a project would be mutually beneficial and help allay concerns by some Africans that Beijing is only being driven by self-interest.

[…] But it is wrong to paint intentions as being similar to those of colonial powers which stripped Africa of its resources and gave little in return. China’s engagement with the continent is different. It surpassed the US in 2009 as the biggest trading partner and Li said in Ethiopia as he began his trip on Monday the volume would double by 2020. At that time, Chinese direct investment is also expected to quadruple to US$100 billion.

Any relationship on such a scale is bound to have ups and downs – Li described them as “growing pains”. That is especially so for Africa, the world’s second-fastest growing region, which is as rife with poverty, corruption, ethnic and religious divisions and battles over resources as it is with economic potential. The World Economic Forum on Africa, which ended its annual session in Abuja yesterday, aimed to come up with initiatives to help overcome such hurdles. China, through its trade, investment and aid, is already doing that. [Source]

Despite the investment, at The Wall Street Journal, Wayne Arnold and Drew Hinshaw highlight China’s cautious approach to the continent after a series of investment failures:

Chinese Premier Li Keqiang is using an official visit to Africa this week to pledge more loans and trade deals to governments that control the commodities and oil that Beijing needs to fuel its economy.

But Mr. Li’s pledges so far—trade agreements with Ethiopia and an expansion of a credit line for African nations to $30 billion from $20 billion—belie the fact that China is taking a more cautious approach to the continent after a series of big loans and investments in resource deals over recent years haven’t panned out.

China’s foreign direct investment in Africa is falling. Chinese companies invested $2.5 billion in 2012, the latest official available figures, down from $3.2 billion in 2011 and a peak of $5.5 billion in 2008, according to China’s Ministry of Commerce. [Source]