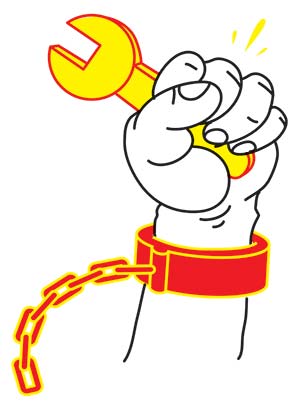 Dexter Roberts at Bloomberg reports that labor advocacy groups which try to help workers organize in China’s factories often find themselves evicted from their offices, investigated for tax violations, and warned by police to discontinue their work:

When Chunfeng advised striking workers at a Nike supplier in Dongguan, Guangdong, last month, police grabbed two of the center’s staff. “The party is afraid to give authority to the people,” says Chunfeng’s director, Zhang Zhiru, one of the two detained, who was held in a villa for two days. “They are afraid a strong civil society will destabilize their control.” Zhang says his colleague, Lin Dong, is still being held and has been accused of disturbing social order, a criminal offense.

“Civil society” is the slightly wonky term used by social activists worldwide to describe the network of nonprofit, nongovernment organizations, from churches to tenant groups and labor associations, that address people’s needs for faith, food, shelter, justice, health care, and respect in the workplace. Civil society is supposed to turn ordinary people into informed citizens ready to resist encroachments on their rights. In China, civil society has started putting down roots. But a crackdown by the authorities on the boldest civil groups may change that.

[…] Helping workers organize is riskier than ever. “Most groups related to labor issues can’t get registered at all, and their situation is actually getting worse,” says Dee Lee, director of the Inno Community Development Organization in Guangzhou. He says his group has successfully registered but carefully avoids any activities that could be seen as promoting collective bargaining. “The general game of survival is the biggest challenge facing labor groups,” he says.

Finally, any attempt to organize nationwide gets crushed, as was the case with the New Citizens Movement. The organization wanted officials to publicly declare their wealth and called for equal access to education for migrant workers’ children. In 2013 sympathizers held monthly dinners across China to discuss reform. In January, New Citizens’ most visible member, Xu Zhiyong, was sentenced to four years in prison for “gathering a crowd to disrupt public order.” “What really gets you into trouble is the way you organize,” says Simon. “Every communist party knows that the way to develop is through cells. When they see, ‘oh s-‍-‍-, they are emulating us!’ then they decide to crack down.” [Source]

Bloomberg News also reports that the Chinese government  “is gaining an unlikely ally in its effort to overhaul the economy: striking Chinese workers”:

“The government is trying to play a game that uses worker demands to push its broader economic goals,” said Mary Gallagher, director of the Center for Chinese Studies at the University of Michigan. “They have a belief they can use this kind of activism.”

That’s a gamble. Six years after a new labor law gave workers greater rights, Chinese labor remains in a twilight world. While the central government wants workers to see income gains, local Chinese officials — often promoted based on their ability to maintain stability and generate growth — usually side with employers in any dispute. [Source]

Read more about how Beijing is dealing with a threat to their investment as a result of an increase in worker protests, via The Financial Times.  Also, read more about the Yue Yuen shoe factory strikes via CDT.