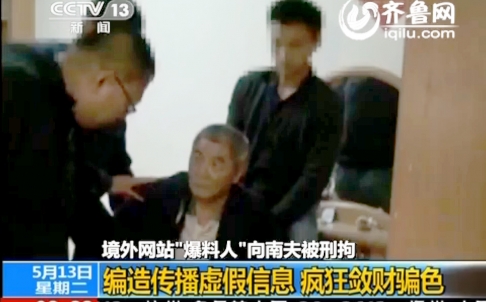 A prolific contributor to the U.S.-based Chinese news site Boxun.com was detained on May 3rd for posting articles which “seriously misled the public and Internet users and denigrated the image of the state,” Xinhua reports.

Xiang’s actions were instigated and highly paid with U.S. dollars by a man surnamed Wei who was in charge of the website, police said. [Source]

In a statement [Chinese], Boxun denied making large payments for stories, saying it did not have the resources to do so, and relied mainly on volunteers. Xiang was in any case motivated by a sense of duty to help petitioners, it added, and had never taken the initiative in demanding payment.

Xiang’s confession was televised, extending a trend that has caused alarm among lawyers and rights advocates. From South China Morning Post’s Patrick Boehler and AFP:

Boxun’s editor Watson Meng said Xiang was a journalist working for the news website, adding that Xiang was the second contributor to be detained this year. The first detention occurred in Beijing in March, he said, but declined to reveal the contributor’s identity.

[…] His admission of guilty was broadcast on national television on Tuesday. “I have smeared the nation and the party, my actions were criminal,” he said in his broadcast admission. “I am sorry to the party and the government, and my family.”

Xiang was also seen on national television admitting to paying for sex and having extramarital relationships. He is the latest in a series of outspoken critics to be paraded on television by the authorities. [Source]

Also recently these is 70-year-old journalist Gao Yu, one of many prominent figures detained with links to commemorations of the looming 25th Tiananmen anniversary.

Boxun, in the delicate words of Want China Times, “often makes claims that are difficult to prove.” On the topic of fallen Chongqing Party chief Bo Xilai, for example, it was an early source of word that his former right-hand man Wang Lijun had fled to the U.S. consulate in Chengdu; but it also suggested that Bo’s wife, Gu Kailai, had had a rival killed and put on display in the famous Body Worlds exhibition; that Bo had orchestrated a car crash involving now-president Xi Jinping; and that he was one of a number of officials who paid actress Zhang Ziyi to sleep with him. Zhang promptly sued, reaching an undisclosed settlement with the site in December.