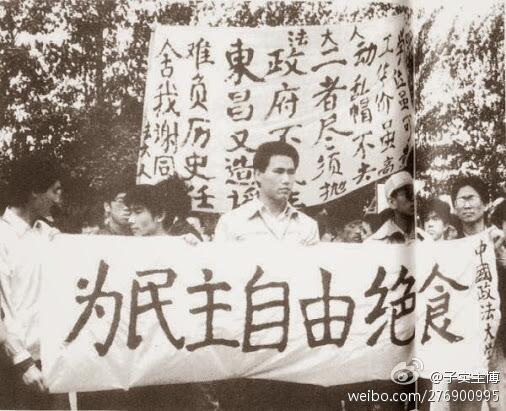 Following the detention of prominent rights lawyer Pu Zhiqiang on Tuesday after a seminar last Saturday on the upcoming 25th anniversary of the June 4th Tiananmen crackdown, South China Morning Post’s Verna Yu reported on Tuesday that several other participants have also been detained or questioned. The 30-day maximum extension on criminal detention would potentially allow police to hold them throughout the sensitive run-up to the anniversary next month.

Liberal scholar Xu Youyu and cyberactivist Liu Di were both placed in criminal detention yesterday after attending a seminar involving 15 people at a private home in Beijing on Saturday, their lawyer, Shang Baojun said last night.

The website of rights group Chinese Rights Defenders reported that scholar Hao Jian had also been criminally detained, but this could not be independently verified.

Meanwhile, Xinhua reports that Gao Yu, a veteran journalist who disappeared nearly two weeks ago, shortly before she was due to attend another Tiananmen memorial meeting, was detained for leaking state secrets. The secret in question is believed to be “Document 9,” an internal Party memo warning against seven “false ideological trends, positions, and activities.” From Patrick Boehler at South China Morning Post:

Gao, 70, shared a secret document with editors of a foreign website in August last year, the Xinhua news agency said on Thursday. Gao was “deeply remorseful” of her actions and “willing to accept legal punishment”, the report said, ending speculation over her whereabouts two weeks after she disappeared.

China’s national broadcaster CCTV paraded her confession in a early morning news broadcast on Thursday, blurring out her face but identifying her by her full name.

[…] The Xinhua report did not specify what secret document Gao allegedly shared, but the timing would coincide with the release of the full text of a confidential Communist Party circular that called on authorities to crack down on political dissident in August last year. [Source]

The broadcasting of Gao’s confession follows a series of similar transmissions last year which caused concern among lawyers and other observers.

Authorities have also moved to thwart activities with no clear connection to the looming anniversary. The New York Times’ Didi Kirsten Tatlow reports that Beijing police broke up an unrelated meeting on Wednesday, detaining several people:

[…] Seizing the cellphone of one of the detainees, the police then sent a text message to about 30 participants in a meeting set for later in the day and canceled it, according to Yu Fangqiang, one of the meeting’s organizers.

Although the meeting was a seminar on obstacles facing gay groups wishing to register as nongovernmental organizations in China, it had also advertised itself as an event examining “civil society and the state.”

[…] Other activists said a total of nine people who planned to attend the meeting were detained Wednesday morning, with four still missing. They included Liu Jianshu, a member of a Beijing legal affairs nongovernmental organization and the spokesman for a petition against “custody and education,” an extrajudicial form of punishment, that was signed by 109 people and sent to the National People’s Congress on Monday. [Source]

Human Rights Watch’s Maya Wang suggested on Twitter that the heightened controls are only highlighting the anniversary:

Detention of Pu and others r the best ads for the 25th anniversary & is attracting exactly the kind of attention the authorities don't want.

Indeed, the detentions have drawn international notice, while Pu’s in particular has provoked a strong reaction online. Actor Zhang Ziyi, for example, posted an apparent statement of veiled support on Sina Weibo. To contain the response, search terms related to Pu’s case have been blocked, while censorship directives have ordered that Sina “wholeheartedly cleanse Weibo of blog posts and comment threads in support of Pu Zhiqiang,” and instructed all sites to “strictly search out and delete” related content. Fei Chang Dao noted that a report on Pu’s detention by the often wayward Beijing News was quickly deleted.

We especially encourage civil society to face up to the abuse of police powers, and the dreadful trend of expanding police powers. The so-called [charge of] “picking quarrels and provoking trouble” was first expanded to the online world by the Supreme People’s Court [in cases where posts have] at least 500 re-posts. Now [these charges] of “picking quarrels” have expanded to cover scholars holding seminars, which is preposterous. The police state has grown more and more severe, so that civil rights cannot be protected and human rights are under assault. [Source]

China Real Time, meanwhile, translated a statement released soon after the meeting by the participants themselves:

Some participants pointed out that savage suppression of June 4th planted the roots for today’s social chaos. As a result of June 4th, abuse of power, bullying of the masses, indulgence of corruption, indifference to justice and other inherent drawbacks of Chinese social system became more severe and hopelessly entrenched. To rebuild social morality in China, we dig deeply to weed out those roots.

Some participants emphasized that they did not need to ask the authorities to reassess June 4th. The right to judge guilt or right or wrong, they said, doesn’t belong to those in power.

What we require and we are doing now is trying to investigate the truth of the incident, restore accuracy to history, and thereby achieve justice and a social transformation while closing the country’s wounds. [Source]