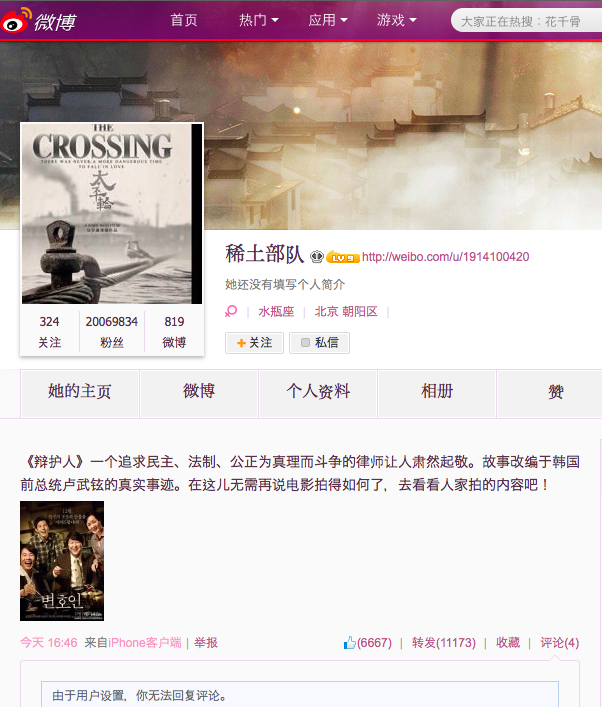 Prominent and heavily-monitored rights lawyer Pu Zhiqiang was detained yesterday, along with others who attended a weekend meeting to discuss the upcoming 25th anniversary of the June 4th crackdown. China’s censors have ordered the media mum on Pu’s detention, and related search terms have become forbidden on Weibo. Following are two of the many deleted weibo comments about the detained civil rights lawyer, via CDT Chinese:

丽桥-坚定地活着: On December 20, 2013, Pu Zhiqiang was selected by Chinese Newsweek as “the most influential person in [promoting] rule of law in China for 2013,” and now even someone like him is arrested? Is this the sounding of the death knell?

：Pu Zhiqiang must be released! Is snatching up lawyers our path towards judicial reform?

Actress and model Zhang Ziyi did her part to subtly show support to Pu by invoking the recent film The Attorney (변호인), a story inspired by the life of former South Korean president Roh Moo-hyun. Prior to being elected president of recently democratized South Korea in 2003, Roh was a tax lawyer who, after defending student protesters, became a human rights lawyer.

稀土部队: The Attorney: A lawyer who pursues democracy, rule of law, and justice fights for the truth and deeply inspires. The story is adapted from the real accomplishments of former South Korean president Roh Moo-hyun. No need to say more here, go see for yourself what it’s about!

淡蓝色天空80: All kinds of metaphors. I admire your courage, the system should be ashamed.

洼地里的蛇: To post this right now, it looks like Lawyer Pu has touched a lot of people.

QuyaoMac: If our country could show this kind of film, we would already have democracy and rule of law. […]

See also CDT coverage of netizens reinterpreting a line from the patriotic 2011 film The Founding of a Party to show their support for Pu.