Don’t Call Me Dude, Boss or Bro. It’s Comrade to You. 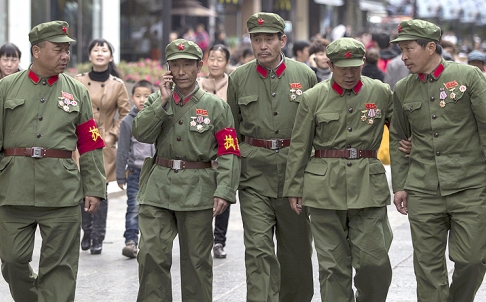 As the Xi administration’s drive to root corruption out of the Communist Party continues, the Wall Street Journal reports on a circular issued by Guangdong’s Discipline Inspection Commission—the provincial inter-party graft watchdog—instructing cadres on how to address their fellow Party members:

In Guangdong, party officials have instructed the rank and file not to use “boss” or “big guy” (dai lou or lou ban in Cantonese) when addressing supervisors, saying that such terms disturb the party’s “internal democracy.”

The terms also are “crass” and “vulgar,” says the official Xinhua News Agency, which cited a directive from the party’s disciplinary body.

Guangdong party’s discipline watchdog also said it was concerned about use of the term “brother” and even “dude”  or “pal,” saying these terms all hurt the image of civil servants and did not suit the nature of the party and government.

Xinhua linked the directive to part of a campaign advanced by President Xi Jinping, the party’s big guy (OK, general secretary, if you must), who has taken aim at what he calls “four forms of decadence” among Chinese party officials, among them formalism, too much bureaucracy, hedonism and extravagance.

[…] What the connection might be between terms like “dude” or “pal” and fighting decadence is isn’t exactly clear. China Real Time tried to get a bit more clarity but provincial officials could not be reached for comment on Tuesday. [Source]

Didi Kirsten Tatlow’s coverage for Sinosphere notes a similar circular in Yunnan Province, and provides a translated list of the forms of address deemed on- and off-limits by the recent directives:

[…E]ven for slang titles like “dude,” there is a hierarchy. Here’s a brief glossary of what not to call officials from now on: (Note that many of these titles do not apply to women, but no female variations were offered by the circulars.)

While the directed party conduct for using casual address seems to be simple—namely, don’t use casual terms of address—the correct use of formal terms is a bit more complex. As provincial directives on “naming discipline” were being drawn up, an earlier report from the Wall Street Journal noted that the inter-party use of formal titles requires studious attention:

Long gone are the good old days when everyone simply called one another “comrade,” and no other titles were necessary.

Nowadays, understanding the proper way to address officials of various ranks is essential for anyone who comes into contact with Chinese officialdom. It is particularly important for insiders themselves, and many newly minted civil servants who haven’t yet learned the rules “cause offense the moment they open their mouths.”

Chinese media recently have run some interesting articles on “the study of terms of address for government officials.”

One basic rule is to “always use the higher title when addressing officials with two possible titles”—and while it sounds simple enough, it isn’t always as straightforward as it seems. To apply the rule correctly, one must have a certain degree of familiarity with the civil-service ranking system and the relative power of different post holders.

In simplified terms, Chinese civil-service posts are divided into “leadership” and “nonleadership” roles. The ranks corresponding to the leadership posts are, in descending order: […] [Source]