Murong Xuecun: I, Too, Will Stand Up for Tiananmen 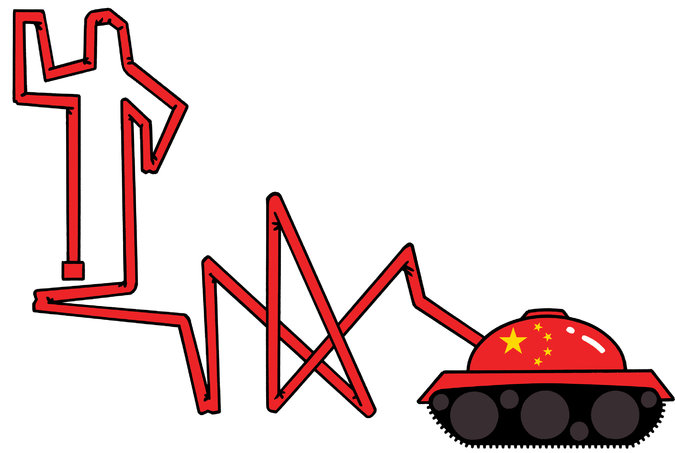 Detentions and other restrictions continue as the 25th anniversary of the 1989 Tiananmen crackdown approaches. Writing for The New York Times from Sydney on Thursday, author Murong Xuecun highlighted the detentions of his friends Xu Youyu, Hao Jian and Pu Zhiqiang, among others, after a meeting in Beijing that he himself had been unable to attend. In his absence, an essay he had written about the crackdown was read aloud. Declaring that “by the government’s logic, I too have committed the crime of ‘picking quarrels and provoking trouble,’” he announced his intention to turn himself in on his return to China.

Around 2003, a friend bought a documentary about the crackdown in Hong Kong. In no time we all made copies. One day I watched it with some friends in a bar in the southern city of Guangzhou. One scene in particular struck me. A youth lay prone on a broad avenue amid the sound of intermittent gunfire. We thought he was dead, but then he suddenly began crawling in a circle. He did not dare stand up, but he didn’t want to stay where he was, pretending to be dead. Crawling was better than doing nothing. “If I were there,” said a migrant worker from Sichuan Province who was standing behind us, “I’d have carried him to safety.”

[…] Most of my friends have warned me to lay low for a while, but I have thought it through: If the situation in China continues to deteriorate, I cannot stand idly by. If I too am arrested, perhaps more Chinese people will awaken to the realities of their situation. My arrest will be my contribution to resisting government efforts to erase the nation’s memory.

I have seen China change. I have seen the Internet awaken its people. In 1989 one person was brave enough to stand before a column of tanks rolling through Beijing. If the same thing happens again, I am certain hundreds of ordinary citizens will defy the tanks, and if they come under fire, there will be thousands of other citizens with the courage to face the guns and say, “I will carry them to safety.” [Source]

At The New York Review of Books this week, Jonathan Mirsky recalled his own confidence in 1989 that China had reached a turning point:

[…] How wrong we were—foreign reporters (I was a correspondent for The Observer in those days), China-watchers abroad, and many Chinese themselves. During a television interview in the square I said that, while I couldn’t predict, I was confident “China would never be the same again.” I wrote several opinion pieces for my paper saying much the same, surer about Chinese affairs than I had ever been.

On the night of the army’s entry into the center of Beijing I stood on one of the marble bridges under Mao’s portrait over the gate into the Forbidden City that faced onto the square. Shots sounded ever louder and as the army advanced under the dark red walls of the City a young man next to me shouted that the streaks in the darkness, even the sparks flashing off the stones, were “blanks.” Seconds later he slumped over the railing with a widening red circle on his t-shirt. No longer the China-expert, I turned to leave. My way was blocked by some Armed Police, who said, “You motherfucking foreign journalist,” knocked out five of my teeth, and fractured my left arm. Their officer was shooting people they had beaten to the ground and would have shot me if the Financial Times’s Robert Thompson had not bravely walked over and led me away.

The next morning, Sunday, June 4, I cycled back to the edge of the square just in time to see soldiers mow down parents of students who had come to look for those who had not returned home and who were feared to have been killed and their bodies burned. While I lay in the grass at the side of the avenue, doctors and nurses from the Peking Union Hospital (where my father had briefly worked in the early Thirties) arrived in an ambulance and in their bloodstained gowns went among the fallen; the soldiers shot them down, too. I managed to fly back to London later that day.

[…] I may have been inadvertently right in May 1989 when I said China would “never be the same again.” It is sleeker, richer, internationally more reckless, more corrupt—and its leaders are ever more terrified. […] [Source]

See also filmmaker Ai Xiaoming’s reflection on the detentions of Pu Zhiqiang and others, translated by CDT.