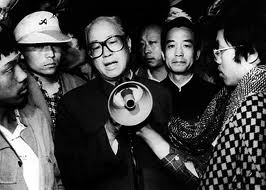 For the New York Times, Chris Buckley revisits the fall of Communist Party General Secretary Zhao Ziyang in May 1989, as the student movement was growing in size and strength. Zhao encouraged government dialogue with the students and opposed the imposition of martial law, which eventually led to the violent June 4th crackdown. On May 19, Zhao visited hunger-striking students on Tiananmen Square and famously told them, “We came too late”:

Mr. Zhao’s fall was a central act in the drama that culminated in the June 4 crackdown that 25 years later remains a sensitive topic in China. A day after Mr. Zhao visited the students, Prime Minister Li Peng signed orders to impose martial law on urban Beijing, setting in motion two weeks of confrontation between protesters and soldiers. The student protesters and sympathetic residents initially held back the troops, but on the night of June 3, soldiers entered the city with the authority to shoot as they moved to retake Tiananmen Square, and most observers believe that many hundreds of demonstrators and bystanders were killed on the streets.

To the party authorities, the subject of the late Mr. Zhao remains taboo, and his death in 2005 passed with scant official mention. In 1989, Mr. Deng and his supporters accused Mr. Zhao of splitting the leadership and revealing to the outside world the elite schism, exacerbating the upheavals engulfing Beijing. To his admirers, Mr. Zhao has stood as a rare example of unblemished principle, an enlightened leader who chose to forsake power rather than oversee a bloodbath.

But some of those admirers acknowledge that Mr. Zhao misread treacherous political currents. He was outmaneuvered as Mr. Deng turned against him and embraced the position of Mr. Li and others who wanted a forceful response to the students’ occupation of the square.

“Zhao was an enlightened politician, but he wasn’t a very seasoned one,” Wu Wei, who in 1989 was a secretary to Bao Tong, the senior aide to Mr. Zhao, said in an interview published in January. “He always believed that Deng supported his reforms, and didn’t consider what would happen when Deng withdrew support from him, and he lacked adequate mental preparation for the intensification of conflict inside the party.” [Source]

Read more about Zhao Ziyang and the 1989 protest movement, via CDT. Read also a series of original news reports from the spring of 1989, via CDT.