Q&A With Evan Osnos on New Book ‘Age of Ambition’ 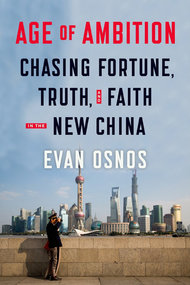 At Sinosphere, Austin Ramzy speaks with Evan Osnos about his new book Age of Ambition: Chasing Fortune, Truth, and Faith in the New China, released today:

Q. You write that one of the reasons you chose to move back to the U.S. is you wanted to see how things look from there. Has it changed the way you see China?

A. The thing that rises to the surface most in being back and looking at it from far away is that the things that dominate China’s image around the world are not the same things that they were 10 years ago. You ask somebody in the United States today “What do you think about China?” and the things they’ll mention include pollution in cities, extraordinary academic strength and the success of its students, and this kind of sudden and mysterious profusion of wealth.

Ten years ago I think if you asked people in America what the dominant fact of China was people would have probably put human rights on the list. They would have talked about the very early stages of China’s growth story. It is striking to me how different the image of China in the West today is compared to a few years ago.

Being back in United States, I am impressed by the way the lives of ordinary people in China and U.S. are converging even at the same time the two countries as political, military and strategic entities seem to be getting into greater confrontations with each other.

The other times that the United States has found itself in confrontation with other countries, it’s typically been accompanied by this radical, almost incomprehensible, difference in the lived experience of people on the ground. Being in the Soviet Union in the 1980s had almost nothing to do with being in the United States in the 1980s. Being in Iraq in 2002 had nothing to do with being in the U.S. in 2002. [Source]

Also, listen to a podcast with Osnos at The Leonard Lopate Show and read about his decision not to publish the book in China, via CDT. Read more of and about Evan Osnos at CDT.

Minitrue: Syndication Ban on The Paper