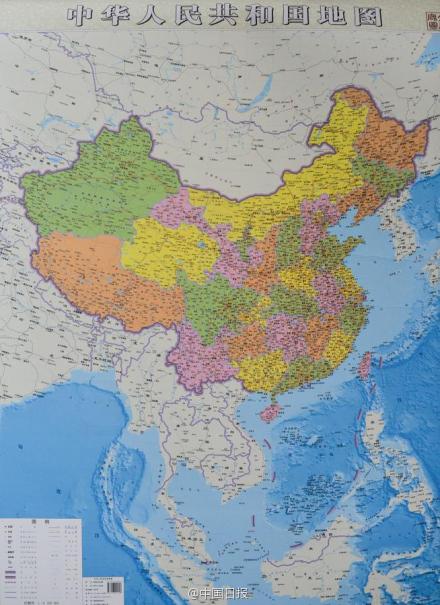 China has unveiled a new map of the country that has been vertically extended to emphasize Beijing’s territorial claims in the South China Sea. Edward Wong at the New York Times reports:

Chinese claims in the South China Sea have appeared on Chinese maps before, but mostly in the form of an inset. The new map takes a novel approach. It was presented on Monday in Changsha, the capital of Hunan Province, by Lei Yixun, the chief editor of the publishing house.

In representing China’s claims, the map has 10 dashes in the shape of a tongue around the South China Sea. This is one dash more than the map that was drawn up by the Kuomintang government in the 1940s and that is often cited by Chinese officials as a historical basis for the Communist state’s claims. Many people call that earlier map the “nine dashes” or the “cow’s tongue.” The new vertical map, with its 10 dashes, can be seen on the English website of People’s Daily, the Communist Party’s mouthpiece.

[…] One thing the map does not show is how China is moving sand onto three or four reefs and rocks in the Spratlys in an effort to turn them into full-fledged islands. Foreign officials say China has been doing this since January. The Philippines has already twice filed formal complaints with China over the island construction, and Vietnam and the United States have both denounced it. [Source]

A Supreme Court judge in the Philippines recently described the earlier nine-dashed line as “a gigantic historical fraud” after consulting 72 ancient maps of the region, including 15 of Chinese origin.

China Real Time’s Wayne Ma posted an explanation of the new map’s rationale and some official and unofficial reactions:

“[This map] will give the reader a comprehensive and intuitive awareness of China’s entire map,” Xinhua said, citing Lei Yixun, the editor in chief of Hunan Map Press. “Readers won’t ever think again that China’s territory has primary and secondary claims.”

“Some map-publishing authorities in some provinces issued a new version of China’s map, and I believe their goal of doing this is to serve the public,” foreign ministry spokeswoman Hua Chunying said Wednesday at a regular news briefing. “There is no need to over-read their intentions. China’s position on the South China Sea is consistent and clear. There is no change in our position.” [Source]

The new map got the Rorschach blot treatment on Weibo. From Bethany Allen-Ebrahimian at Foreign Policy:

It may not be very big, but it’s the shape, not the size, that has captured the attention of Chinese netizens. One author and social commentator posted on Weibo, a Chinese microblogging site, that the new map of China no longer resembles a rooster — the standard description taught to Chinese children in school — and queried, with seeming innocence, what the map looks like now. With language careful not to attract the attention of porn-wary censors, Weibo users speculated on whether it looked like an eagle, a map of Africa, or a certain male organ that had one exclaim, “It’s a boy!” [Source]

How countries and territories are depicted on maps is a sensitive issue that Google has had to grapple with. Currently, Google Maps maintains different versions of its mapping platform to comply with local laws in “around half a dozen” different countries. The Telegraph’s Matthew Sparkes reports:

If you look at Arunachal Pradesh, one of India’s 29 states, from the Indian version of the website you will see the border that its government believes to be correct. View the same region from within China and it appears as “South Tibet” under Chinese control. From within the UK you see both borders marked with a dotted line to indicate that there is a local dispute.

[…] “It happens very rarely and it’s due to some states having laws that require providers that operate in their country to display maps in particular ways,” he said. “We’re probably just the most well known for it, but you’ll find it across the board. There’s no ulterior motive going on behind the scenes here.

“If there’s some dispute, we’ll represent that there’s a dispute there. We try not to take sides. In many parts of the world people will live quite happily with disputed borders in other parts its more of an issue. Unlike the UK and must of Western Europe, in may parts of the world maps are still seen of consider strategic importance, so there are constraints. [Source]

The article includes visual comparisons for cases including Aksai China and Arunachal Pradesh on the China-India border.