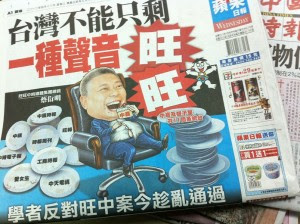 Taiwan’s media freedoms are facing a triple threat. Since the early 2000s, China has engaged in a clandestine media war against Taiwan by encouraging pro-China Taiwanese business tycoons to purchase Taiwanese media outlets, by pressuring Taiwanese media proprietors invested in China to censor their content, and by using embedded advertising and advertorials to influence media and public opinion. The goal of this strategy has been to use business people to surround the Government and to employ President Hu’s strategy of ‘Entering the Island [of Taiwan], Entering the Household, and Entering the Mind’’ (Rudao Ruhu Ru’nao).

These are the claims of Taiwanese scholar Hsu Chien-jung in a timely new paper published in Asian Survey, which seeks to outline how China has sought to shape and influence Taiwanese media. Starting with Taiwan’s democratisation in the early 1990s and charting the subsequent media liberalisation that led to a proliferation of media outlets and respective editorial positions of these media, Hsu identifies how a small proportion of those media, specifically in print and cable TV news stations, came to dominate the market and greatly influence public opinion. The success and growing partisanship of these outlets then made them attractive targets for politicians and parties in Taiwan and China who were seeking to shape public opinion in their favour and sway the outcomes of important elections.

Hsu focuses on three broad areas to illustrate and flesh out an argument that Taiwan’s media environment is facing political pressure to limit or censor its criticisms of China, pressure produced from a conflict between maintaining editorial freedom and the price extracted by Beijing for Taiwanese seeking investment and sales opportunities in Chinese markets. These cases examine the takeover of the partisan pro-KMT China Times Group by Want Want Group Chairman Tsai Eng-meng, examples of Chinese pressure on Taiwanese media proprietors and the rising frequency of illegal embedded advertising, and finally the controversy surrounding the sale of Next Media, the public backlash and Anti-Media Monopoly Movement which it engendered, and the related protests over the Cross-Strait Service Trade Agreement’s (CSSTA) provisions for allowing greater Chinese investment in the Taiwanese publishing sector. […] [Source]

Click through to read more on Taiwan, via CDT.