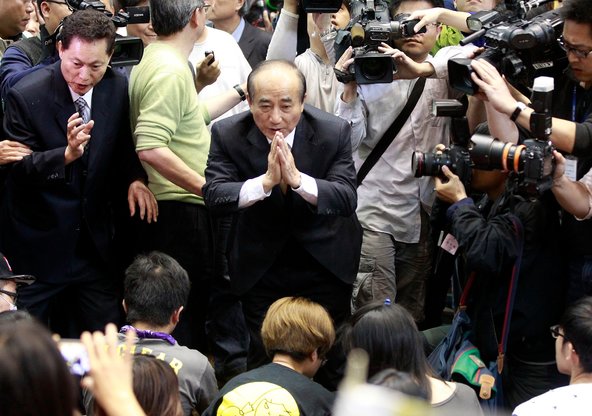 The New York Times’ Austin Ramzy reports that student protesters have promised to end their three-week long sit in at the Taiwanese legislature, after speaker Wang Jin-pyng conceded to closer oversight of trade agreements with China. The occupation began as a part of student demonstrations against a trade pact made by the Kuomintang Party to liberalize service sector trade with mainland China.

“Many people asked, If you leave this place, won’t you lose your bargaining chip?” said Chen Wei-ting, one of the student leaders, at a news conference announcing the end of the occupation. “The truth is, everything we’ve said and all our energy has allowed this to spread from a student movement to a movement of all the people.”

[…] While many protesters and their supporters say they oppose the trade deal outright, others endorse some form of a service trade pact with China. The most widely held complaint is that the agreement has been hurried along with little opportunity for public review. Protesters call the government’s methods a “black box” and have named their campaign the Sunflower Movement, a reference to sunlight and transparency.

[…] “The greater the trade amounts from the two sides, the greater concern of the general public about China becomes,” said Huang Kwei-bo, an associate professor of diplomacy at National Chengchi University, who served as a policy adviser during Mr. Ma’s presidential campaign. “I think it’s very clear: Mainland China has tried very hard to buy Taiwan, to win the support of Taiwan’s people economically. But I don’t think that strategy really works.” [Source]

Nevertheless, Aries Poon and Tom Wright report at China Real Time, polls show a public more or less evenly divided over the pact, which remains “likely to pass eventually in some form.” In any case, they argue, the-long term trend of expanding economic ties seems inexorable:

For one, China and Taiwan’s economies already are inextricably linked. About a third of Taiwan’s $300 billion per year in exports go to China, largely electronic components, petrochemicals and textiles.

Many Taiwanese firms, including Foxconn, which assembles Apple Inc.’s iPhone, have set up factories in China to benefit from cheaper costs and a larger domestic market.

Now, Taiwan’s banks, brokers and retailers are hoping to get better access to China’s market through the services pact. Business groups view China’s market as a way to boost the economy, which grew at just over 2% last year, hobbled by high costs and a small domestic market.

[…] The public’s view on hugging China closer is more mixed. A recent government-organized poll, released last week, found that 58% of respondents want the protesters to leave the legislature. It also found that 41% of respondents supported the services pact, while 40% disapproved. [Source]