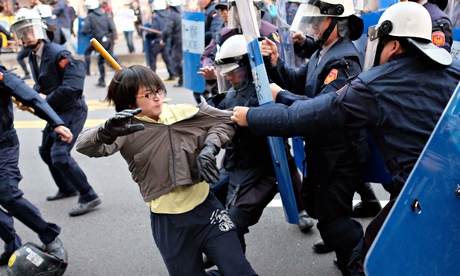 Ralph Jennings of the Los Angeles Times reports that riot police were summoned to clear protesters outside the Taiwanese cabinet offices following student demonstrations against a trade pact that will liberalize service sector trade with mainland China:

Police in Taiwan fired high-pressure water cannons Monday on hundreds of demonstrators who broke into the country’s Cabinet compound to protest the liberalization of trade with political rival China, handing the island president one of his worst crises in six years.

About 2,000 officers, including riot police, clashed for five hours with a student-led group that forced its way into a guarded government complex in central Taipei. But more than 1,000 remain camped out around Taiwan’s parliament to stop passage of a deal with China, which has a much larger economy and claims the self-ruled island as its own.

[…] As tens of thousands of people demonstrated around in Taiwan over the weekend, several hundred left Parliament for the nearby Cabinet offices and broke in after nightfall. Police sent by Taiwan’s premier arrested 61 people before ousting all protesters by about 5 a.m. [Source]

Taiwanese president Ma Ying-Jeou defended the trade agreement out of economic considerations while the student protesters opposed the agreement in part due to worry that increasing ties with mainland China would undermine Taiwan’s democracy. From The AP, via the Guardian:

On Sunday, the Taiwanese president, Ma Ying-jeou, rejected protesters’ demands to shelve the trade pact, which would open dozens of service sector industries to Chinese investment. It was signed in June by representatives from Taipei and Beijing but awaits ratification by Taiwan’s legislature.

Ma said rejecting the pact would undermine Taiwan’s credibility and harm its economy, which has become increasingly tied to Chinese markets.

While some support the student demonstrators, others in mainland China view the demonstrations in Taiwan as a case against democracy. Lily Kuo at Quartz reports:

Mainland Chinese have always watched political events in Taiwan with special interest; many view the island as a test case for democracy in a Chinese society. The latest unrest is causing some mainland social media users to question the wisdom of protests that impede the government’s ability to govern.

“Taiwan is a democratically elected government…Capturing the Executive Yuan is contrary to the rule of law and undermines democracy,” one blogger in Beijing said (registration required). Some called the protesters “radicals,” while one blogger just said, “Complete chaos.” Another said, “Your democracy has shocked us.” The Global Times called the demonstrations “a farce.”

Still, some support the students’ freedom of expression, and the rights of the media to cover the protests. One blogger whose account says he is in Fuzhou, Chinasaid: ”Taiwan, hold on! Tonight, we are all Taiwan.” Some even questioned why Chinese students were not also demonstrating against a trade deal that could mean mainland jobs may be given to Taiwanese workers. [Source]

Emily Rauhala at Time writes that the student-led demonstrations show that many young people in Taiwan are wary of China’s growing influence over the island:

To the young people and opposition party supporters gathered in Taipei, TiSA is another step toward China, and a step too far. They also worry that this latest round of economic liberalization will hurt small and medium-sized businesses on the island. More fundamentally, they see TiSA as a sign of Sinification, and worry President Ma and the ruling Kuomintang are to keen to trade away the island’s hard-earned, democratic gains.

President Ma’s and his government say the trade deal will bolster the economy and keep Taiwan competitive with countries like South Korea. Addressing demonstrators on Sunday, he applauded their passion, but questioned the decision to occupy government offices. “Is this the sort of democracy we want?” he asked. “Must the rule of law be sacrificed in such a manner? Do we not take pride in our democracy and our respect for rule of law?”

[…] But it is Taiwan’s democracy, for better and for worse. And, as the past week’s events show, young Taiwanese will fight for it. [Source]

The Chinese Central Propaganda Department has issued a directive calling for the media to word the coverage of the protests with care.