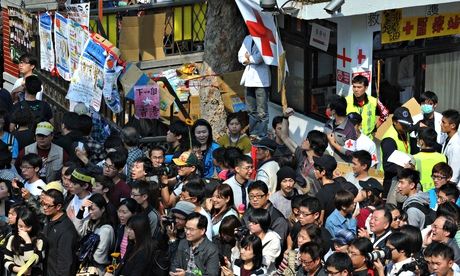 The Associated Press in Taiwan (via The Guardian) reports that “hundreds of protesters opposed to a trade pact with China have invaded Taiwan’s cabinet offices,”  and “up to 1,000 demonstrators” gathered outside the government building intensifying week-long resistance against the Mainland:

The protest comes five days after mainly student demonstrators occupied the nearby legislature after a ruling party politician reneged on a promise to submit the pact to legislative review.

Signed in June by representatives from Taipei and Beijing, the pact is awaiting ratification by Taiwan’s legislature. It would open dozens of service sector industries in each side’s territory to companies from either country.

[…] Speaking earlier, Ma said going back on the pact would undermine Taiwan’s economy and damage its international credibility.

Cindy Chang at The Los Angeles Times speaks with student protesters at the scene, over forty of whom have been injured and cleared away by police after breaking into the building on Sunday night:

Hundreds of protesters who have slept in and around the legislature since Tuesday night have survived mostly on food and bottled water donated by supporters.

The chamber where the legislature normally meets has become a headquarters for the student movement, with “Free Taiwan” and other slogans draped around a portrait of Chiang Kai-shek, whose Nationalist forces retreated to the island after being defeated on the mainland by the Communists in 1949.

[…] Student leaders insist tying Taiwan too closely to China will harm Taiwan’s hard-won democratic freedoms and pave the way for China’s eventual takeover of the island. That has been the central goal of Beijing’s Taiwan policy since the two sides split amid civil war in 1949.

Jenson Yeh, 33, a salesman from Taichung, said he would sacrifice some economic growth to preserve freedom of speech.

“I can imagine that the Chinese would use government investment to penetrate Taiwan to a certain degree. Then they would have power over Taiwanese society,” Yeh said. “They wouldn’t need to use force – it would be de facto unification.” [Source]

See footage of the protesters from the BBC: [youtube]https://www.youtube.com/watch?v=iy67IlB__cU[/youtube]