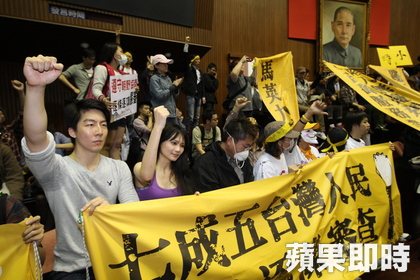 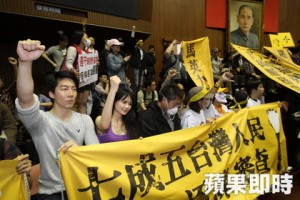 Central Propaganda Department: (1) The media must immediately cool down coverage of the Pingdu homicide case. Discontinue follow-up reporting. (2) Regarding Taiwanese students protesting the trade agreement, you may focus on coverage of conflict and clearing out the protesters, but you must take care with your wording. (March 24, 2014)

One farmer died and three others were injured after their tent caught fire on Friday in Pingdu, Shandong. The farmers were apparently protecting their land from seizure. The Oriental Morning Post reports (translated by China Media Project):

On March 21 at around 1:50AM, a fire broke out in a tent erected in a field in Dujiatuan Village, in the Fengtai sub-district of Pingdu City in Shandong Province. [The incident] resulted in the death of one farmer and injuries of varying extent to three others. According to a preliminary investigation by local police, arson is suspected.

A Xinhua News Agency reporter confirmed yesterday that there have been tensions in Dujiatuan Village over land seizure issues since last year. According to villagers, there have been illegal land seizures at Dujiatuan, and about 200 mu of land has been taken by developers, for which villagers received only crop compensation of about 25,000 yuan per mu. But according to regulations, land requisition compensation should include land compensation and resettlement assistance in addition to compensation for crops and other property on the land. [Source]

Police have been clearing student protesters out of Taiwan’s cabinet building. Over 150 people have been injured by riot police. The protesters, who have also been occupying the Legislative Yuan, are trying to stop the ratification of a trade pact with China.