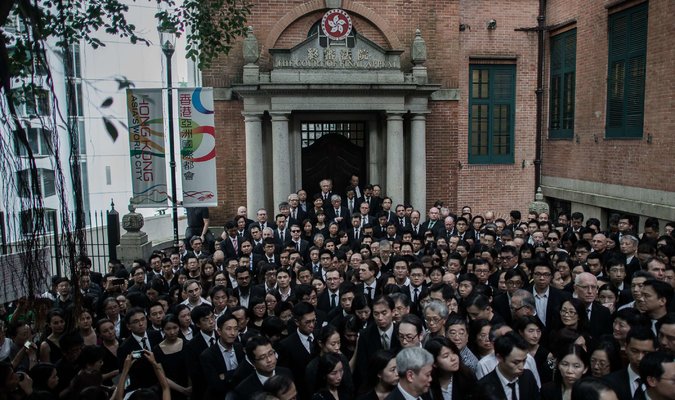 Chris Buckley and Mike Forsythe at The New York Times report on the “surge of discontent” washing over Hong Kong in the aftermath of the informal 10-day referendum on the election process  which ended today with nearly 800,000 votes in total:

On a recent morning, Agnes Chow, 17, and another teenage activist rode a van through the streets of Hong Kong, urging people through a loudspeaker to vote in an informal referendum for a more democratic way to pick the city’s top leader. But the vote, which has been condemned as illegal by the Chinese government, was about much more than the city’s leadership, she said.

“I think the younger generation feels the future of Hong Kong falls on its shoulders,” said Ms. Chow, who was only 6 months old when Britain returned Hong Kong to China. “The inequality of the society is one of the reasons people have come out to vote. The social issues are tied in because without a democratic system, there is no pressure on the government to change.”

A surge of discontent is washing over this harbor city of 7.2 million people, which has long taken pride in its status as an enclave of free enterprise, free speech and independent courts abutting the Chinese mainland. The immediate conflict is about how to elect Hong Kong’s leader, the chief executive. But the underlying resentment voiced by many here is that the city’s political-business machine is rigged against them.

For their part, the “big four” audit firms – Deloitte, PwC, Ernst & Young and KPMG – issued a joint statement opposing the recent protests, which was published in three of the major Hong Kong newspapers, according to a report by Adam Minter in Bloomberg.

At The South China Morning Post, Stuart Lau, Austin Chiu, and Brian Yap report also on the “record number” of lawyers who marched to protest a recent white paper on Hong Kong published by the Chinese government, because they fear it “jeopardises judicial independence”:

Nine chairmen of the Bar Association, mainland civil-rights lawyer Teng Biao, and a handful of government lawyers joined the march.

Teng said he saw the white paper as in line with Beijing’s increasingly suppressive attitude towards opposition at home.

Solicitors also braved the heat and joined the march, from the High Court to the Court of Final Appeal, in apparent defiance of Law Society president Ambrose Lam San-keung, who earlier spoke in favour of the paper. [Source]