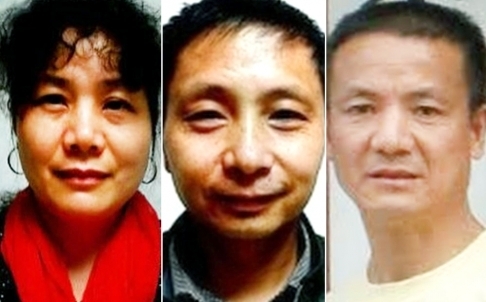 New Citizens’ Movement activists Liu Ping and Wei Zhongping were each sentenced to six and a half years in prison on Thursday, while a third, Li Sihua, received a sentence of three years. The New Citizens advocate causes such as asset disclosure by officials and education rights for migrants’ children; these judgments are the latest in a series against members of the movement, which has been systematically dismantled over the past year. From Patrick Boehler at South China Morning Post:

The Yushui District People’s Court in Xinyu found all three defendants guilty of “picking quarrels and provoking trouble”. Liu and Wei were also found guilty of “gathering a crowd to disrupt public order in a public space” and “using an evil cult to undermine law enforcement”.

The Xinyu verdicts are the harshest reported so far in a nationwide crackdown on the New Citizens Movement that started last year.

[…] Local authorities in Xinyu have long considered the three “thorns in their eyes”, said Maya Wang, a Hong Kong-based researcher for Human Rights Watch. “The local authorities have essentially used the current crackdown as an opportunity,” she said. [Source]

The charges of “using an evil cult” refer to messages Liu and Wei sent about the trial of a Falun Gong practitioner in 2012. A press release from Amnesty International reported that some of the charges had been changed without proper notice:

The court changed the charge from “illegal assembly” to the more heavy charge of “picking quarrels and creating troubles” six months after the trial and just days before the sentencing. This sudden change meant that Liu Ping’s lawyers, Si Weijiang and Yang Xuelin, were only informed of the date of the sentencing two days in advance. This violates the legal requirement of three days’ advance notice, and forced the lawyers to be absent at the sentencing due to other court appearances. [Source]

The three’s trial in Xinyu in December—their second, after they aborted the first by dismissing their own lawyers in protest—was marked by pandemonium outside the courthouse. Defence lawyers including Pu Zhiqiang, himself recently arrested, reported that hundreds of “government-appointed thugs” surrounded them, shoving and hurling insults. (A subsequent directory from the State Council Information Office ordered that “all online news on the case of Liu Ping and the rest […] especially news related to the comments and actions of their lawyers” be deleted.) The New York Times’ Didi Kirsten Tatlow reported on Wednesday that local authorities had taken a heavy-handed approach ahead of the sentencing as well:

Local supporters of Ms. Liu, Mr. Li and Mr. Wei were being rounded up and, in one case, kidnapped off the street the same evening the sentencing date was announced, according to the husband of one supporter. That repeated a pattern throughout the trial at the Yushui District People’s Court of potential witnesses for the accused being “taken off the streets” by officials just before they were scheduled to testify, Ms. Liu’s daughter, Liao Minyue, said in a voice message.

According to a text message from the husband of one such supporter, Liu Xizhen: “A little past nine” on Tuesday evening, “Xizhen and I came back from a stroll on the street and she was suddenly kidnapped by Fu Xiaogang (workplace head) and Zhou Hongbing (a deputy manager)” — his wife’s superiors at work — “and a bunch of unknown men. They stopped me from taking pictures and they grabbed Liu, shoved her into the car and went away.” [Source]