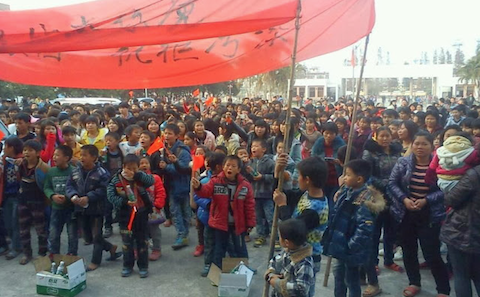 chinadialogue’s Luna Lin reports a senior official’s acknowledgement last week that lack of public consulation is a major cause of environmental protests in China:

Speaking at the launch of the 2013 Report on the State of the Environment in China last Wednesday, vice environment minister Li Ganjie said environmental concerns had fuelled an increasing number of “mass incidents” – the official term for protests – partly because “the planning process in some areas and some departments may not be as scientific and rational as it should be”. He added that some projects “don’t share enough information with the public”.

“If the public doesn’t participate in the process, and is unable to get explanations and timely answers to their questions, this generates mistrust and suspicion,” Li said.

[…] According to the annual State of the Environment report, China has recorded 712 cases of “abrupt environmental incidents” (including protests triggered by environmental concerns) in 2013, a 31% surge from the previous year’s figure. [Source]

Lin points to protests against a waste incineration plant in Hangzhou last month as a prominent recent example. Also at chinadialogue, Sam Geall argued last week that Londoners’ contrasting acceptance of a similar local incinerator “comes down to participation, transparency and trust”:

[…] Thanks to a Europe-wide requirement to establish a Pollution Release and Transfer Registry (PRTR), I can log into a national database of all the potentially hazardous materials released into the air, water and soil. In a few clicks I can tell you that in 2012, SELCHP released just over 15 tonnes of ammonia into the air, but no dioxins.

It is the legal responsibility of the facility to provide this information; the data is crosschecked and has been independently assessed. If I’m still concerned about the plant, I have the legal right to read the full environmental impact assessment for the plant, which included local consultations, and if I want to know more, I can submit a freedom of information request. It’s open for visits from the public, too.

In China, transparency and public-participation rules exist but are poorly implemented. […] [Source]

When authorities in Germany failed to engage with the public in a timely manner over the Stuttgart 21 railway station project, he added, the resulting scenes might have been familiar in China: public demonstrations, a heavy-handed police response that only escalated the protests, and the local authorities’ eventual capitulation.

China’s environmental protests have sometimes been celebrated as demonstrations of public will, but critics warn that they are neither an efficient nor reliably effective mechanism, and only highlight social inequality.

At Bloomberg Businessweek, Christina Larson briefly summed up the “grim” contents of the MEP’s State of the Environment report itself (PDF, Chinese):

Air pollution in China receives the most attention globally. Despite a recent stretch of fairly nice days in Beijing, according to the MEP’s report, in 2013 only three major Chinese cities met the government’s own standards for urban air quality.

Water pollution—and water shortages—may be an even graver problem. The pollution level in several major rivers, including the Yangtze and its tributaries, has grown more severe since 2010. Meanwhile 11 percent of the land in the Yangtze’s watershed and adjacent areas was watered by acid rain. Sixty percent of groundwater-testing sites nations wide ranked as “poor” or “very poor” in water quality. [Source]

Caijing reports that the Ministry has submitted a ten-point, two-million-yuan ($320 billion) battle-plan against water pollution to the State Council for approval. Others have their own suggestions: South China Morning Post’s Mandy Zuo and Andrea Chen note proposals to channel treated, desalinated water to Beijing from the heavily polluted Bohai Gulf, as well as building “wind portals” to help clean the capital’s air.

Hu Fei , a researcher at the Institute of Atmospheric Physics at the Chinese Academy of Sciences, dismissed the proposals as “ridiculous suggestions from non-professionals”. He said Beijing’s air pollution was a systemic problem, and removing dust in a certain area would have very little impact.

“It’s like a dietary supplement that keeps a healthy person fit but won’t cure someone who is already ill,” he said. “Beijing is already very ill.”

“The land is high in the west and low in the east. They’re asking water to flow uphill,” he said. [Source]