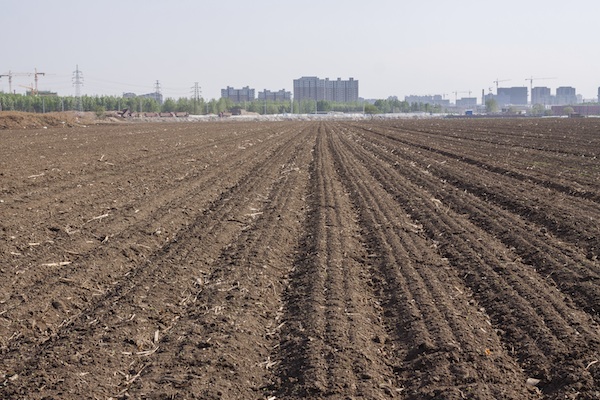 At Scientific American, Angel Hsu & William Miao argue that despite the release of new soil pollution data in December and a subsequent report in March, details about the state of China’s soil are little clearer than when earlier findings were labeled state secrets.

Overall, the report admits that the situation is “not optimistic.” The survey further reveals that inorganic pollutants are the primary contaminants in China’s soil. Chronic exposure to cadmium can lead to kidney disease, and was recently found to be present in almost half of the rice tested in the city of Guangzhou, the capital city in Southeastern Guangdong province. Arsenic, which is a water contaminant, can lead to skin lesions and skin cancer. These pollutants result from industrial waste from factories and mines as well as automobile exhaust. Irrigation using polluted water resulting from the use of fertilizers and pesticides, as well as raising livestock, can also cause soil contamination.

[…] While the initial soil pollution survey is a start, it’s not enough. It took almost nine years for the government to reach such meager and incomplete results. More details about the spatial location of sampling sites and the levels of exceedance for individual points, as well as the release of the raw survey results, would provide better clarity and much-needed transparency to understand how prevalent the problem may be. As the survey stands, there is too much left open to interpretation. Without access to the full raw data and results of the survey, it may be impossible to know exactly what the government in China may be nuancing with these statistics. Such numbers, while providing a starting point, may be hiding a much more dangerous truth beneath their surface. [Source]

The post at Scientific American includes an infographic showing the composition, distribution, severity and effects of China’s soil pollution based on the survey data. Read more from CDT on inadequate transparency’s role in fueling environmental protests, and China’s soil contamination and food security.