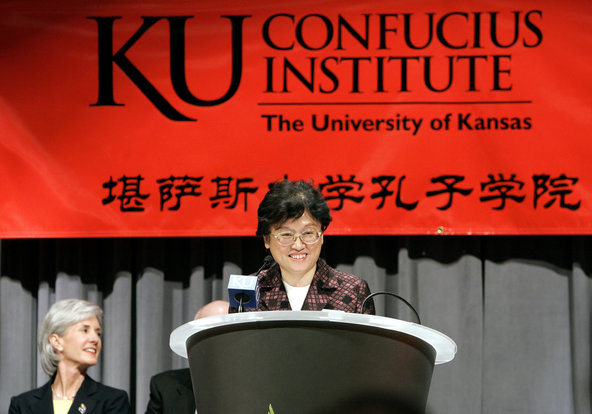 Last weekend, the American Association of University Professors issued a public call for universities in the US to either terminate long-controversial Confucius Institutes, or to renegotiate contracts with the Chinese government in a way that would safeguard academic freedom and promote transparency. The Chronicle of Higher Education reports:

In a statement approved last week by the AAUP’s Committee A on Academic Freedom and Tenure and released here on Saturday at the association’s annual conference, the AAUP argues that many colleges in the United States and Canada have sacrificed their integrity and jeopardized academic freedom by giving the Chinese government considerable say over the centers, which are known as Confucius Institutes.

As things now stand, the statement said, the Confucius Institutes in place at about 90 North American colleges “function as an arm of the Chinese state and are allowed to ignore academic freedom.” It said the agreements that establish them feature “nondisclosure clauses and unacceptable concessions to the political aims and practices of the government of China.”

[…] Confucius Institutes, which began popping up at American colleges in 2004, have been touted by their host institutions as a means for them to provide far more instruction in Chinese language and culture than they would otherwise. Such colleges generally maintain that, although the centers are financed by a Chinese agency, Hanban, they have not led to any interference by the Chinese government in their host colleges’ affairs.

Some faculty groups at colleges have opposed such partnerships, however, arguing that the institutes involve the Chinese government in the affairs of colleges in ways that threaten shared governance and academic freedom. [Source]

Late last year, the Canadian Association of University Teachers issued a similar plea, and just last week members of the Toronto District School Board publicly recommended suspension of a new Confucius Institute partnership following the official launch of CI Toronto. Last month, professors at the University of Chicago launched a petition calling for the school not to renew its CI contract, which expires in September, and the CI’s governing board responded with an official defense. The Chinese government sponsors 445 Confucius Institutes worldwide, and hopes to have 500 in operation by the year’s end. A report from the New York Times notes that, while the Chinese government has granted greater concessions in negotiating contracts with prestigious universities, certain topics invariably remain “off-limits”:

[…] Beijing has appeared to be more accommodating in its negotiations with American universities, wrote Mr. Sahlins, especially when it has wanted to enlist a prestigious university such as Stanford University or the University of Chicago.

Despite the greater concessions, American universities still have found that agreements with Beijing often contain requirements that are at odds with their concepts of academic freedom. “There is a whole list of proscribed topics,” June Teufel Dreyer, a professor of Chinese government and foreign policy at the University of Miami,told The New York Times in 2012. “You’re told not to discuss the Dalai Lama — or to invite the Dalai Lama to campus. Tibet, Taiwan, China’s military buildup, factional fights inside the Chinese leadership — these are all off-limits.” [Source]