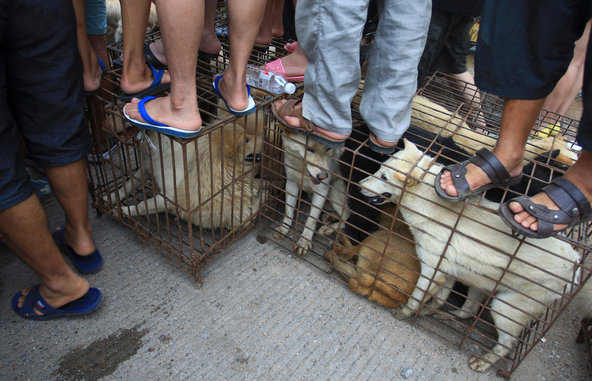 Yulin, a southern city in China, kicked off its annual dog-eating festival over the weekend amid a fierce backlash and protests by animal rights groups. The New York Times’ Austin Ramzy reports:

The Yulin festival has attracted intense national interest in China, where the number of pet owners and animal rights supporters has increased dramatically in recent years. Several celebrities, including the actress and director Zhao Wei, have condemned the event, and other similar festivals have stopped because of public pressure. On the Sina Weibo microblog forum, the topic came close to the World Cup in the number of people following over the weekend, The Beijing News reported.

At least one confrontation turned violent on Saturday, and one customer at a dog meat restaurant was injured in a clash with protesters, the state-run China News Service reported.

On Friday, activists purchased at least 200 live dogs from vendors to prevent them from being butchered. In one case, which was widely covered in the Chinese news media, a small yellow dog with a noose around its neck was held aloft by a vendor who asked activists how much they would pay to spare its life. Eventually a woman from Chongqing paid 350 renminbi, or about $55, to free it, Xinhua reported. [Source]

Retreating from its usually strong rhetoric on political issues, the paper sought the middle ground by saying that even if the Yulin Dog Meat Festival is held each year, there must be some dog-protection festivals held elsewhere.

“In reality, dogs can be companion animals as well as food. Different people view it differently, which causes conflicts,” the anonymously written editorial said.

The People’s Daily said the issue was simply about food in a small town, but it escalated into a full-blown public debate about “civilisation, human rights and dog rights’.

[…] The party newspaper said that while traditions like the dog-eating festival should be tolerated, these should be subject to certain rules: no abuse, no stealing and no slaughtering dogs in public. [Source]

For many in Yulin and elsewhere in China, dog eating is a deep-rooted practice that goes back many centuries. From Connie Young at CNN World:

Ask a local when the tradition of eating dog meat began and you’ll likely be met with a dumbfounded expression — it is akin to asking someone when people started eating beef. For many in the city, eating dog meat is a hard habit to break, despite changing attitudes about the treatment of animals in China.

[…] In one stall, a butcher places a gutted and skinned dog on a wired sheath and uses a blow torch to cook a delicacy known to locals as “crispy skin dog meat.” As the shop owner butchers a another piece of dog, flecks of flesh flick onto her face. She tells CNN she’s been in the trade for over 10 years.

“This is our tradition and we are used to eating dog. It’s our culture and we won’t change … It’s tasty! But we won’t kill our pet,” she says, referring to her own dog who is cowering in the other side of the shop. Her dog tucks his head under a freezer, shielding his eyes from the carcasses of the dogs and cats hanging from hooks. [Source]

Growing anti-dog meat sentiments in China are due in part to the growing number of pet owners among the country’s burgeoning middle class. BBC News’ John Sudworth reports:

The Chinese pet industry is reportedly booming – like almost everything else associated with middle-class lifestyles in this country.

The veterinary and animal-grooming market is said to be worth well over $1bn (£1.7bn) a year and is predicted to grow rapidly.

[…] So no wonder then that the dog-eating festival due to take place in the southern city of Yulin this weekend is drawing more than a few negative comments.

[…] In response, there are reports that the festival quietly opened a week early this year and that some restaurants in Yulin have taken down signs advertising dog meat on the menu. [Source]