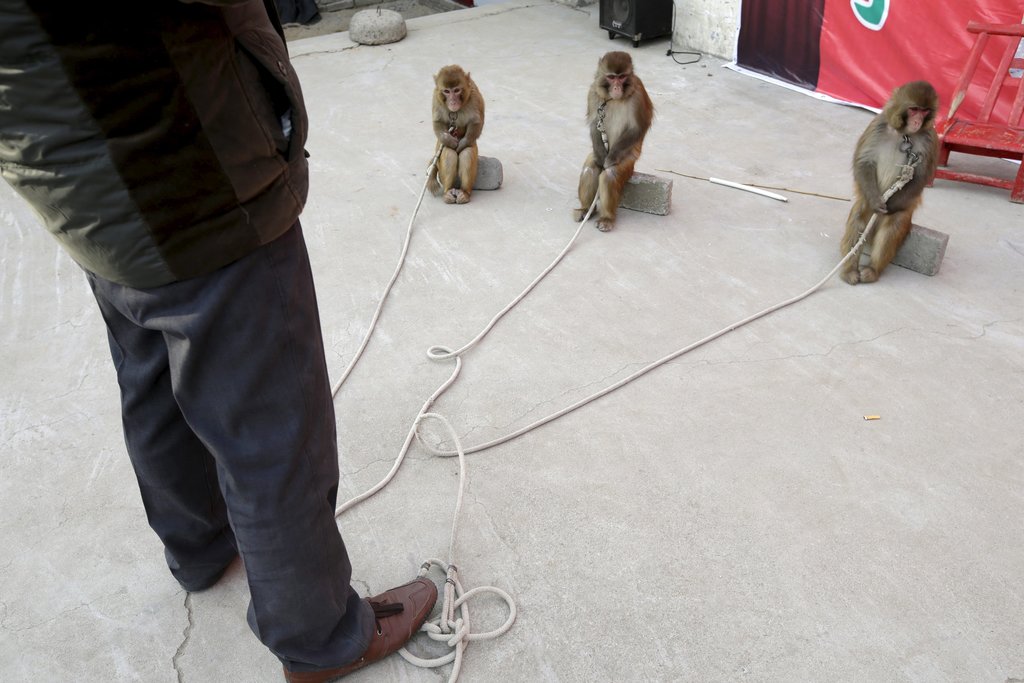 For centuries, macaque monkeys have been a ubiquitous entertainment fixture in Chinese cities, where they can be seen performing tricks at the behest of traveling showmen. In recent years, the cruelty that many of these performing macaques face has attracted criticism, and the historical vocation has dwindled as public attitudes on animal rights have changed. At The New York Times, Chris Buckley reports from Xinye County, Henan, a historical training ground for performing macaques, on how the newly begun Year of the Monkey has increased demand for macaque performances—and also kindled a spotlight on abuse inherent in the industry:

“Things are looking up. Many, many zoos and tourist sites have been calling to make bookings,” Mr. Zhang said, shouting into his phone while on the road to rehearsal for a big show on Monday featuring 30 monkey troupes. “Audience attitudes have clearly changed. They used to see us as beggars and grifters, something shameful. Now they’ve begun to see us as part of a glorious tradition.”

[…] For the macaques, however, their turn on the Chinese zodiac cycle of 12 animals may not be an unmitigated blessing.

[…] Photos from Xinye show macaques chained and huddled fearfully in barren cages. Even Mr. Zhang said trainers had to end their old, harsh ways to win over new audiences.

[…] The monkey masters of Xinye have their own plentiful complaints about abuse.

“We used to go to every town, going from south to north across the year,” said Liang Yixian, a former performer from Xinye who has switched to breeding and training monkeys. “Nowadays, wherever we go, the urban management guards keep an eye on us. They don’t like us and our monkeys and always make us move on. How can we make a living this way?” […] [Source]

As the demand and permissibility of street performances has shrunk, Chinese zoos have picked up the slack, offering performances as main attractions—and becoming subject to public backlash. Also at The New York Times, Shaojie Huang interviews two Chinese zookeepers on how the Year of the Monkey could affect their primates and the many spectators that come to view them:

Q. So the coming Lunar New Year is going to be special?

A. They have no idea what that means.

The best treat I hope they’ll get for the year that’s being celebrated in their name is that they’ll get to live in a more enriched environment, where they can display their natural behavior and not be tempted by the food visitors throw at them.

Visitors do still throw food, and part of my job is to educate them on why that’s bad. […] [Source]

While China’s captive monkeys may be unaware of their significance in the current stage of the Chinese zodiac cycle, an online entrepreneur has found in it a legally questionable business opportunity. The South China Morning Post’s Gloria Chan reports:

A Chinese internet user is cashing in on the Year of the Monkey by selling marmosets – the world’s smallest monkey – over the internet, despite a strict ban on selling primates on the mainland, according to a media report.

According to Xiamen Daily, the user going by the name Xiao Chen posted a photo of a marmoset clinging to his thumb on WeChat, with the caption reading: “Snow leopard skin and Oranda goldfish are out. This is my new year present. Its name is Xiao Sheng.”

The for-profit performance of other captive animals is becoming ever more profitable in China. As American water amusement parks see revenues sinking amid growing public awareness of the treatment facing large captive water mammals, China’s parks are attracting record numbers. The Washington Post’s Simon Denyer reports on the booming industry, its lack of oversight, and the concern it is attracting from animal protection groups:

A new report by the China Cetacean Alliance (CCA), a coalition of international animal­-protection groups, says the parks house 491 cetaceans — a category of marine mammals — including 279 bottlenose dolphins, 114 belugas and nine orcas.

Most of those animals were caught in the waters of Russia, Japan and the Solomon Islands by methods that are “known to cause stress and fear in free­-ranging individuals,” the report said.

[…] Belugas, or white whales, are listed as “near threatened” under the Convention on International Trade in Endangered Species of Wild Fauna and Flora (CITES), an international treaty signed in 1973 to protect wildlife against overexploitation. Virtually all of the belugas in China are imported from Russia, where the population is falling, the CCA said, at a reported price of $125,000 to $240,000 each.

[…] Chinese media reported the first birth of a beluga in captivity here in 2014. The calf died within a month, the CCA said, citing park staff members who said the animal is believed to have died because the tank was too small to allow its mother to nurse it. [Source]

Conservationists and animal rights activists are also concerned about a proposed revision to China’s 26-year-old Wildlife Protection Law, which they fear may authorize the exploitation of endangered species long sought after for their value in traditional Chinese medicine. The New York Times’ :

“This is not a step forward,” said Toby Zhang, director of Ta Foundation, an animal protection organization based in Beijing. “This is a surrender to the wrong and the benighted.”

The draft legislation would be the first major revision of the 1989 law, which animal welfare advocates had long faulted as providing inadequate safeguards for wildlife, and some proposed changes have won their praise. For example, the bill opens with a mention of its intent to protect not just animals but also their habitats. And it states for the first time that the state has a responsibility to help maintain biodiversity.

[…] But where the existing law is vague about the legality of trading and breeding endangered species for food and medicine — a situation critics said opened too many loopholes for animal exploitation and abuse — the proposed revisions make explicit that endangered species are “natural resources” that can be legally bred in captivity for commercial purposes. And it shifts the power for licensing these activities from the central government to provincial ones, which critics say are more likely to bend to local economic interests. [Source]

The South China Morning Post’s Li Jing reports on activists’ call for legislators to shed the idea that commercialization could foster protection as they revise the Wildlife Protection Law:

[…The belief that commercialisation could help to provide better protection] hat has turned out to be false. Instead, the poaching and trade – and eating – of wild animals has become even more popular as the country has grown richer, and poachers and dealers have taken advantage of legal loopholes and lax implementation of the existing law.

Forestry authorities, which oversee the issuing of permits for breeding and transporting wild animals, have become a critical part of this “underground” wildlife industry.

When animal activists found evidence that some people were poaching and trading in wild animals and reported their claims to forestry authorities, only in very rare cases were the dealers punished.

Some longstanding mistaken beliefs involving traditional Chinese medicine are behind increasing incidents of poaching of wild animals – something which goes against the concept of an “ecological civilisation” which is being championed by the country’s top leadership. [Source]