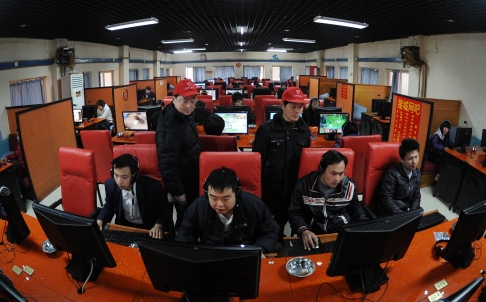 As part of a government crackdown on ostensible rumors, 31 websites have been shuttered “temporarily,” according to a report by the South China Morning Post’s Laura Zhou:

Xinhuanet.com, the state-run website of Xinhua, reported that the affected sites include an online game forum and two online bulletin boards – known as BBS – one based in Guangdong and the other in Hebei province.

Also shut down was the Beijing-based website for zhiqing or “sent-down youth” generations – the Cultural Revolution campaign that saw millions of young city dwellers sent to the hinterlands to be “re-educated by the peasants”.

The services of a Beijing-based mobile phone app for aggregating information – mostly news and forum posts – have been suspended, too, for seven days as a punishment, xinhaunet.com said.

[…] The websites that were closed had “caused bad influence because of their improper management … and will be condemned”, xinhuanet.com reported. [Source]

One notable website that has been shuttered, apparently more permanently, is community translation site Cenci. For Foreign Policy, Alexa Oleson profiles the site:

Over the next three years, Kang built his nonprofit monument to diversity into a respected niche website, delivering Chinese translations of articles in more than 14 languages sourced from around the web. Pieces came from ProPublica, the New Yorker, Asahi Shimbun, Oil of Russia magazine, and Le Figaro. The slogan: “Reporting another dimension of the world.” Cenci is part of a wave of independent citizen journalism that has sprung up in China in recent years with help from the Internet and social media platforms such as WeChat and Sina Weibo. The Chinese government, which heavily censors all official news media and doesn’t tolerate much independent reporting, regularly cracks down on these mushrooming news outlets. But many flourish before they fall. By March 2014, Cenci had about 400 volunteer translators who provided content, free of charge, and had attracted some 140,000 subscribers.

Then on July 14, down came the hammer. Cenci’s accounts were deleted across Chinese social media platforms, including Sina Weibo, Tencent’s WeChat, and film and literature criticism site Douban. On July 15, the icenci.com website, which is hosted overseas, was blocked in China. Cenci, for all intents and purposes, was dead. [Source]

In September, the government announced new regulations stipulating the possibility of jail time for those who spread rumors online. In April, Qin Zhihui was sentenced in the first legal case in the crackdown.