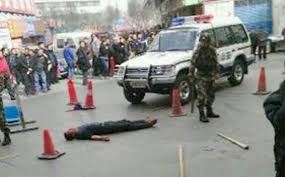 Thirty-two people have been sentenced in China for downloading and spreading “violent Internet content,” which authorities allege is partly responsible for a series of violent attacks in Xinjiang in recent months. Three of the defendants were sentenced to death. From Time Magazine:

The other 29 people were handed sentences ranging from four to 15 years’ imprisonment by seven courts in the region on Thursday, according to state broadcaster CCTV and the region’s official newspaper, the Xinjiang Daily.

The sentencing is part of efforts to scour and scrub the Internet for material promoting religious warfare or teaching bomb-making methods that Chinese authorities say have fueled recent attacks.

[…] Chinese state media have said that virtually all those taking part in recent attacks have been exposed to extremist content online. [Source]

Reuters has more details on the charges:

China has taken down more than 40 groups it calls “violent terror gangs” and arrested more than 400 people in Xinjiang since authorities began a one-year crackdown on May 23, state media said on Monday. [Source]

The Xinjiang Daily reported that the defendants used cell phones and the Internet to download and spread audio clips and videos that incited separatism and religious extremism. With the content, the defendants organized or took part in terror groups in which they illegally produced explosives and promoted ethnic hatred, it said.

In one case, Alijujiang Siyitiwumaier and Xiadawuti Maimaiti were sentenced to life in prison on charges of organizing and leading a terror group in Urumqi that relied on such content, the newspaper said.

They were accused of running illegal “preaching sites” that spread terrorist ideology by exposing participants to books, audio and video content that promoted extremism and separatism and running physical training and lectures imparting terrorist methods, the report said.

The third defendant sentenced to life imprisonment was convicted of similar charges. [Source]

Meanwhile, many Uyghurs have faced challenges accessing even non-violent content online, and some have been censored or detained for posting information advocating on behalf of Uyghur rights, including, most notably, imprisoned scholar Ilham Tohti. The U.S.-based Uyghur Human Rights Project has issued a report looking at the crackdown on Internet use among Uyghurs. From their press release:

Trapped in a Virtual Cage: Chinese State Repression of Uyghurs Online documents how Chinese authorities have exerted effective control over how Uyghurs seek, receive and impart information online in East Turkestan by employing technical and legislative strategies, as well as the use of the criminal justice system to create an atmosphere of fear, intimidation and self-censorship. UHRP interviewed a number of Uyghurs versed in the Internet culture of East Turkestan, experts on Chinese Internet censorship, as well as regular Uyghur users of the Internet in compiling the report.

“It is no surprise Chinese officials have placed unprecedented controls over the Uyghur Internet. They fear that an open online environment in East Turkestan will expose egregious human rights abuses committed against the Uyghur people under their administration,” said UHRP director, Alim Seytoff. “This report is the most comprehensive analysis available on the systemic repression of Uyghur online activity. The Chinese authorities can, at will, imprison Uyghurs who peacefully express dissent online and deny Uyghurs access to the Internet at the flick of a switch.” [Source]