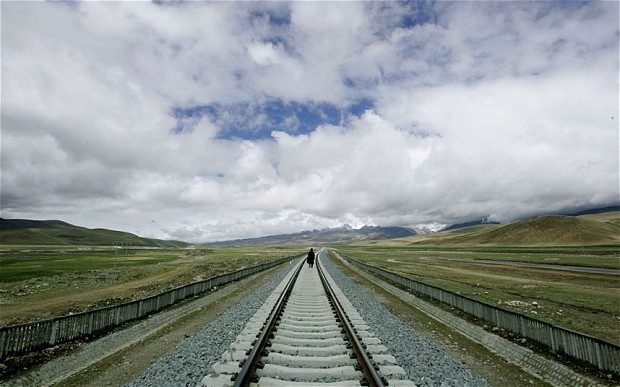 According to a state media report, China plans to construct two railway lines in Tibet that will extend up to the borders of India, Nepal, and Bhutan. The railroads are expected to be completed by 2020. Edward Wong at The New York Times reports:

China plans to extend by 2020 a railroad on the high trans-Himalayan plateau of Tibet to the borders of India, Bhutan and Nepal, according to a report in People’s Daily, the official mouthpiece of the Chinese Communist Party.

The extension would lengthen a 157-mile rail route that is expected to open next month from Lhasa, the Tibetan capital, to Shigatse, the traditional seat of the Panchen Lama, a revered spiritual leader. In 2006, China opened the first railway to Tibet, linking Lhasa to China via the province of Qinghai.

The planned lengthening was criticized by Tibet advocates who said it would bring too many ethnic Han migrants to Lhasa and other Tibetan areas. The Wednesday report in People’s Daily cited Yang Yulin, deputy head of the railways administration in Tibet, saying that two additional rail lines would be added from Shigatse — one to Yadong, a point near the Indian and Bhutan borders, and one to Jilong, an area near the border with Nepal. [Source]

At The Telegraph, Malcolm Moore looks at India’s response to China’s railway project and how it has impacted border tensions between the two countries.

The extensions of the Shigatse line towards Arunachal Pradesh, most of which China claims as its own territory, has alarmed Delhi.

In a sign of its nervousness, the Indian government last month announced that it would build 54 border posts in Arunachal Pradesh on top of the area’s 30 existing posts.

“The railway will contribute to solving border disputes between China and India,” the state-owned Global Times newspaper reported. [Source]

Meanwhile, Adam Pasick at Quartz reports that a proposed Sino-Myanmar railway project has been abandoned recently due to concerns over the potential cost and environmental impact involved.

A $20-billion Burmese railroad project that would link the Chinese province of Yunnan to the Bay of Bengal was cancelled this week due to fears over the project’s environment impact and objections from the public. It was the latest backlash to China’s attempt to expand its influence in its “near abroad” of southeast Asia.

The railway between Burmese city of Kyaukpyu and the Chinese city of Kunming was supposed to follow the gas and oil pipelines (the former is operational, the latter almost finished) that have been the target of widespread protests by Burmese who are outraged that a country largely without electric power is shipping its natural resources to China.

Civil society groups in Burma have long protested the Sino-Burmese railway, with groups in the country’s Rakhine state saying it was one of 10 major infrastructure projects—including the China gas pipeline, major mining works, and hydropower projects—that were granted without the approval of local people who would be affected. Under a memorandum of understanding that has now expired, China was to finance most of the cost of the railroad in exchange for a 50-year concession to operate it.

“This is because we care about the people’s desires. Most people view the project as having more disadvantages than advantages,” a Burmese official told German press agency DPA. [Source]