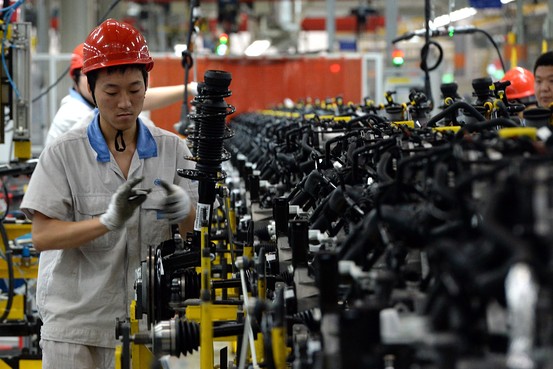 The reports pit the registered rate [for those with local hukou residence registration], which excludes more than 200 million migrant workers, against the newer surveyed rate, whose methodology is undisclosed. The absence of reliable figures on employment has kept economists guessing on how deep of a slowdown China can tolerate without affecting jobs.

“The new survey-based unemployment data should fill some gaps, especially on calculating the unemployment rate of the population that’s not locally registered,” said Yao Wei, a China economist at Societe Generale SA in Paris. The urban registered jobless figures are “almost meaningless,” she said.

The 4.08 percent number given by the Ministry of Human Resources and Social Security was unchanged from March, a report from the official Xinhua News Agency showed. By contrast, the National Development and Reform Commission said on its website the surveyed rate of 5.05 percent had declined for four straight months, without elaborating. [Source]

Alex Frangos at The Wall Street Journal reports that the credibility of China’s published unemployment figures are undermined by a lack of transparency and consistent methodology.

The trouble is that the official unemployment rate—4.08% at last measure—is widely seen as useless as it barely budges in good times and bad. It relies on workers to register at local benefit centers, which misses China’s massive migrant worker population.

In 2008, when the global financial crisis destroyed 30 million Chinese manufacturing jobs by some measures, the rate barely rose. Masses of migrant workers returning home to the countryside revealed the true extent of layoffs. Mr. Li has targeted 10 million urban jobs per year, but this measure is also flawed, relying on a survey biased toward state-owned enterprises and could miss changes in the private sector.

[…] What may be the best measure of China’s employment situation is a state secret. Beijing’s leaders rely on a separate employment survey taken as frequently as every month but which isn’t normally made public. In April, an official let slip that this unemployment rate was 5.17%, a percentage point higher than the official one. Premier Li himself seemed to mention the rate in an op-ed article in September 2013, when he said the unemployment rate was 5% in the first half of 2013. Without knowing where this rate has been historically, these tidbits are of limited value. [Source]