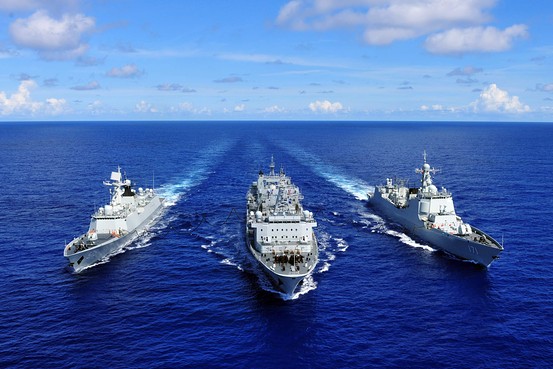 Jeremy Page at The Wall Street Journal reports that China sent a surveillance vessel to waters off Hawaii to monitor an international U.S.-led naval exercise in which China itself is participating for the first time:

China’s debut at the monthlong Rim of the Pacific, or Rimpac, exercises has been hailed by Chinese and U.S. officials as evidence of an improving military relationship, despite escalating tensions over territorial disputes in Asia.

But the presence of the surveillance ship, which can monitor other vessels’ electronic signals and communications, underlines the tensions between the two sides, and could harden political opposition in the U.S. to closer military ties with China.

“It has not entered the territorial seas of the U.S. and it is in accordance with international law regarding freedom of navigation,” he told The Wall Street Journal. “It’s not been disruptive to Rimpac and we don’t expect it to be.” [Source]

China’s involvement in the naval exercise has attracted congressional opposition due to American legal restrictions on military cooperation with it, as well as the participation of Japan and the Philippines, with which China is engaged in ongoing territorial disputes. Jane Perlez at the New York Times reports:

The Obama administration invited China to join the exercises, known as Rim of the Pacific, or Rimpac, despite opposition by congressional critics who argue that China’s actions against United States allies — Japan in the East China Sea and the Philippines in the South China Sea — should not be rewarded with a role in the world’s biggest multinational navy exercise.

Moreover, these critics argue, the National Defense Authorization Act of 2000, which was intended to prevent the transfer of American technological advantages to the Chinese, limits contact between the United States and Chinese militaries.

Concerns about the Chinese Navy’s assertive behavior were heightened in December when a Chinese warship almost collided with an American guided-missile cruiser in the South China Sea, coming within 100 yards of the American cruiser. The incident took place not far from where the Liaoning aircraft carrier was deployed in exercises. Mr. Hagel called the Chinese maneuver “irresponsible,” and the United States Navy said the American vessel was conducting routine freedom-of-navigation operations in international waters.

[…] The organizers of Rimpac, have been careful to keep China out of exercises on humanitarian assistance and disaster relief, which have been led by Japan, with which China has tussled over territorial claims. Some exercises have been off limits to China — the storming of a beach, hunting for submarines — because the presence of Chinese Navy personnel would violate the restrictions in the National Defense Authorization Act of 2000. [Source]

At The Wall Street Journal, Andrew Erickson and Emily de La Bruyere argue that China’s decision to survey the joint Rimpac exercises will likely limit its own ability to denounce the United States and other foreign countries for carrying out similar surveillance operations in the South China Sea.

Beijing has long argued—in opposition to international norms and the consensus of the vast majority of nations (pdf) —that it has the authority to prevent surveillance activities outside its territorial waters but within its claimed EEZ. On this basis, it has bitterly opposed lawful U.S. surveillance activities and engaged in dangerous harassment of U.S. platforms involved in them, most prominently in the Impeccable Incident of 2009.

Now, driven by its own maritime interests and trajectory, China is shifting on this issue, pursuing approaches that will complicate future opposition to similar U.S. surveillance activities.

“Chinese maritime intelligence collection operations increased in 2012,” the commander of the U.S. Pacific Command Adm. Samuel Locklear told the Senate Armed Services Committee in April last year, “with historic first such missions into the Indian Ocean and within the U.S. exclusive economic zones off of Guam and Hawaii .” China’s acknowledgement at the 2013 Shangri La Dialogue of its conducting military surveillance in America’s undisputed EEZ may presage reduced opposition to similar activities in China’s own EEZ as China rises as a maritime power with access interests of its own.

For now, however, Beijing is living a contradiction while Washington adheres to long-established principles (pdf). [Source]

Adm. Greenert said he tried to build on eight proposals for cooperation made by Adm. Wu last September. One was China’s attending the naval drills off Hawaii. Another was implementing a code for unplanned encounters at sea, or CUES, signed by 21 Pacific naval powers in April.

[…] He also said he met for the first time last week with China’s State Oceanic Administration, which oversees the coast guard, and discussed whether they, too, could observe elements of CUES.

“They were open to the concept and saw the value in pursuing it,” he said of the officials overseeing the coast guard, which has often been used to enforce China’s maritime claims.

Other areas of proposed cooperation include sending officers to each other’s naval academies and war colleges, and arranging simple joint exercises at short notice in the Gulf of Aden, the Mediterranean, the South China Sea and the East China Sea, he said. [Source]