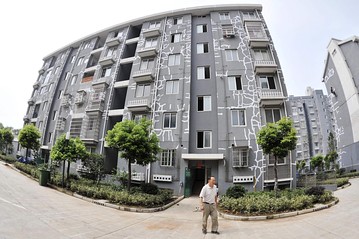 After years of stunning growth, China’s real estate market is slowing down. In response to falling prices and decreased demand, cities across China are taking various measures to encourage sales. Dexter Roberts at Bloomberg Businessweek reports:

More bad news from China’s housing market. Apartment prices fell in June in all but 15 of China’s 70 largest cities. That was the largest number of cities to see prices slide since January 2011, when the government changed how it measures the sector.

Prices in Shanghai and Guangzhou both declined 0.6 percent, while in Shenzhen they dropped 0.4 percent, China’s National Bureau of Statistics announced in a statement released today. The worst performer was Hangzhou, the capital of Zhejiang province, where prices were down 1.7 percent. The price drop comes amid a glut of excess apartments following years of runaway construction.

[…] In an attempt to spur sales, cities are loosening property restrictions put in place when the market was still hot, reported the official Xinhua News Agency on July 18. Over the past few weeks, Hohot, Inner Mongolia, and Jinan, Shandong, began allowing nonresidents to purchase homes and made it easier to get mortgages. On July 14, Nanchang, Jiangxi, followed suit, dropping restrictions limiting purchases in several of its districts. [Source]

One city in Eastern China that was particularly hard hit by the slowdown has turned to a local Party newspaper to urge people to purchase real estate. China Real Time reports:

That notion of Beijing as a regime of real estate salesman was reinforced this week after the Communist Party’s local flagship newspaper in an eastern Chinese city published a front-page article urging people to buy real estate in one of the country’s best-known ghost towns.

“Good Opportunity to Buy Houses in Our City” proclaimed the headline emblazoned across the top of the Tuesday edition of the Changzhou Daily.

The “article” below (in Chinese) argued that despite recent weakness in Changzhou’s property market, there’s limited downside for prices and it’s “a good time to purchase real estate.”

[…] In a country where land sales make up the primary source of disposable income for local governments, it makes sense that a city might want to do what it can to buoy the market. Still, Changzhou’s thinly veiled attempt to talk up its sagging property sector drew harsh criticism from Internet users and rival media, including the Communist Party’s national mouthpiece – the People’s Daily. [Source]