Translation: Measures on the Management of News Media 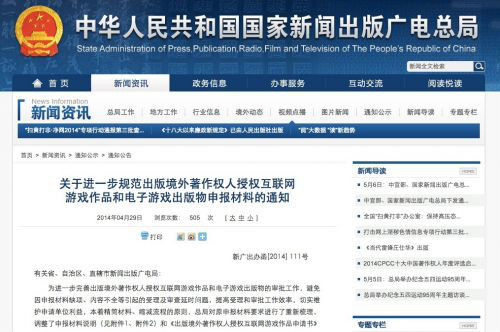 The Chinalawtranslate Community Translation Project has translated the recently announced State Administration of Press, Publication, Radio, Film and Television rules on information sharing for journalists and media professionals. From the introduction:

To the News publishing and broadcast bureaus of each province (autonomous region, directly controlled municipality), and the news and broadcast bureau of the Xinjiang production corps, and to all central party and state ministries and committees, all democratic parties, all departments responsible for managing journals of people’s social organizations and principle news units of the central authorities: In recent years a phenomenon has emerged of press personnel abusing information obtained through professional conduct. Some violate regulations on confidentiality by casually disclosing and transmitting classified information, some use network platforms to release information obtained in the course of professional services, some transmit reports not yet released by their news units to other domestic and foreign media, and some exploit news unit resources to gain improper benefits, disrupting the normal order of news transmission and harming the interests of the Party and the state. So as to truly strengthen the management of information obtained by press personnel in professional conduct, and in accordance with the “Law on the Protection of State Secrets” and other relevant laws and regulations, SAPPRFT has drafted and hereby issues the “Measures on Management of Information obtained by Press Personnel in Professional Conduct.” –State Administration of Press, Publication, Radio, Film and Television. June 30, 2014 […] [Source]

Click through to read the full translation of the measures. The new SAPPRFT regulations went into effect on June 30, and were made public in a July 8 report from the Xinhua News Agency. Government propaganda instructions ordered the Xinhua article to be prominently displayed on news sites with user comments disallowed. A report from Hannah Beech at TIME looks at the breadth of information covered in the regulations, and the reaction of some Chinese journalists:

What exactly constitutes a “state secret,” or a “news product,” or “unpublicized information,” isn’t clear. But in the past, Chinese journalists have been locked up for divulging information in cases that international human-rights groups have deemed spurious. […] Chinese journalists reacted to the latest government directive with both confusion and outrage. One magazine journalist said she hadn’t heard of the new rules until she was contacted by TIME on Tuesday afternoon. She was left with many questions. “Is there any official list clarifying what is a state secret and what is not?” she asked. “If we want to cover an official’s corruption scandal, is this scandal a state secret? Who knows?”

Another reporter who specializes in investigative journalism saw the June 30 rules as “another shackle imposed on journalists.” He continued, “I have discussed this with other journalists, and the general consensus is that self-censorship within the media will probably intensify. More and more topics will become untouchable.” [Source]

Coverage from the New York Times focuses on how the newly emphasized regulations aim to prevent journalists from sharing sensitive information via personal social media accounts or by leaking to the foreign press—a practice that has previously landed journalists in police detention or jail for “sharing state secrets”:

[…] Chinese journalists sometimes resort to using their personal online accounts to release information that cannot be published in their own highly censored state media, or they pass the information on to foreign journalists. But the government of President Xi Jinping has been intensifying its campaign to keep these journalists in line. In May, the police detained the journalist Gao Yu, 70, on charges of providing a “secret central document” to a foreign website. Ms. Gao, who formerly held senior positions in state media, is a longstanding critic of the Chinese government. But after being banned from writing for state media, she began working for the Chinese-language website of the German broadcaster Deutsche Welle. In 2006, Zhao Yan, a researcher in the Beijing bureau of The New York Times, was accused of leaking state secrets to the newspaper. A Beijing court later dismissed the charge but sentenced Mr. Zhao to three years in prison on a separate fraud charge. [Source]

In the 90s, Gao served most of an six-year prison sentence for leaking state secrets to media in Hong Kong. Read more about Gao Yu’s recent arrest and confession, via CDT. These regulations on information sharing come on the heels of a separate recent SAPPRFT rule preventing journalists from publishing “critical” reports without Party approval. Bob Dietz, the Committee Protect Journalists’ Asia coordinator, predicts that China’s media conditions will continue to tighten under Xi Jinping:

[…] In June we said the government was aiming to do nothing less than undermine the watchdog role of the media by threatening to punish any journalist or media organization reporting news not approved by the government. The new rules are a continuation of that crackdown. In the years before the Xi government, many Chinese journalists would tell me that, despite the restrictions and China’s harsh record of jailing reporters, they felt they were working in a “golden age” of Chinese journalism. Their rationale was that, if they played the system wisely with editors who could walk the fine line between offending censors and meeting the public’s increasing expectations for reliable, revealing news, they could robustly pursue the craft of journalism. But the stream of restrictive rules handed down since the current government came to power is aimed at closing as many of those loopholes as possible. Expect more to come. [Source]