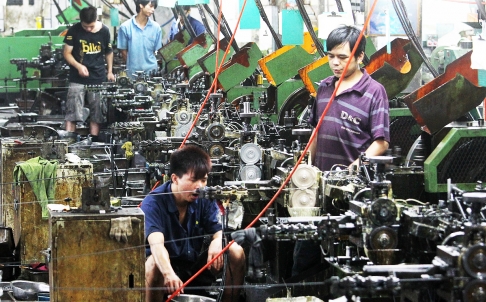 At the South China Morning Post, Andrea Chen reports that hundreds of young men living in the manufacturing area of Dongguan have mysteriously died in their sleep over the last ten years:

The number of young male workers with no history of health problems who died suddenly in their sleep has risen sharply over the past decade in the manufacturing hub Dongguan, research shows.

The sharp increase came to light after researchers at Zhongshan School of Medicine based in Guangzhou released their analysis of police records of deaths in Dongguan over the past two decades, the official Guangzhou Dailyreported. [Source]

Sudden unexplained nocturnal death syndrome (SUNDS) occurs when healthy individuals die in their sleep with no other fatal disease or injury. Cleo Alexis Fagela at China Topix reports that symptoms include choking and difficulty breathing:

Symptoms often manifest themselves in previously healthy individuals, where death occurs 3 to 4 hours after falling asleep.

Witness accounts often describe victims to be choking, gasping, and even foaming at the mouth. These symptoms are then followed by erratic heart fibrillations that eventually cause death. [Source]

As the victims in Dongguan were largely migrant workers employed in factories and other work sites requiring long hours of manual labor, researchers believe that the surge in SUNDS is likely associated with low wages and poor working conditions. From the People’s Daily:

Zhang Yiri, an associate professor from Guangzhou City Polytechnic, attributed the growing number of cases in Dongguan to the unreasonable payment system, which encourages people to work overtime.

“Many bosses pay very low base salaries to workers. But the payment for overtime work is higher,” Zhang said.

“Therefore, many people apply for overtime to earn extra money,” he said.

In a paper on SUNDS, the Guangzhou Institute of Forensic Science’s Chao Liu and his colleagues identified the syndrome as an “ethnic and region specific” disorder that affects populations in East as well as Southeast Asia. Amta Badkar at Business Insider reports:

A recent paper on SUNDS by Chao Liu et al, published in Forensic Science International, looks at SUNDS in Southern China and related diseases from other countries. From the paper:

As an ethnic and region specific natural death, sudden unexplained nocturnal death syndrome (SUNDS) or sudden unexplained death during sleep (SUDS), is a disorder that prevails predominantly in Southeast Asia and has various synonyms in different countries such as the Philippines (bangungut), Thailand (lai-tai), Japan (pokkuri), and China (sudden manhood death syndrome).

[…] The paper examined whether SUNDS is a function of a disorder in the cardiac sodium channel, which is responsible for the function of the myocardium, a heart muscle. “Our data suggest that a majority of Chinese SUNDS may be due to other mechanisms that lead to an increased risk for sudden death during sleep,” the authors write. [Source]