How Many Took Part in HK Protest on July 1st? 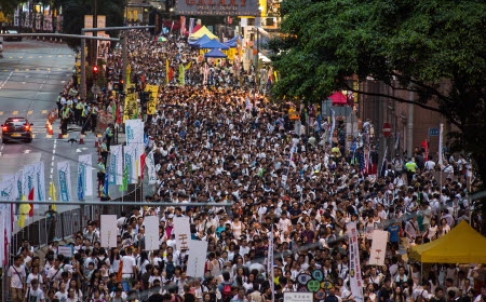 How many protesters took part in this year’s July 1 march? The answer depends on whom you ask.

The annual pro-democracy march’s organiser, the Civil Human Rights Front, put the turnout at 510,000, while the police said the number of marchers peaked at 98,600. They didn’t offer an overall total.

Two academics from the University of Hong Kong estimated the total was between 122,000 and 172,000, while a method employed by the Post put the figure at 140,408. The wildest estimate, posted online, was 1.3 million.

The organisers said their figure was based on the average from three teams of volunteers counting at different points along the route, a method dismissed by University of Hong Kong statistician Professor Paul Yip Siu-fai as “almost impossible”. Their base average was about 340,000, which the front multiplied by 1.5 on the grounds many protested on footpaths or outside the main route. That produced its final figure of about 510,000. [Source]

Joyce Ng and Ng Kang-chung explained the computer-based methodology behind the Post’s estimate of 140,000:

The Post commissioned chartered land surveyor Thomas Lee Wai-pang to provide an independent and alternative analysis. Lee and his team used “the density and area computation” method that has been used by other media organisations to calculate crowd size.

First, Lee measured the total area of the rally route, by using the Geographic Information System, to be 57,876 square metres.

Next he calculated the average density of the crowd by analysing photos taken by Post photographers at three different locations throughout the event. The photographers took pictures of the crowd at a near vertical angle from 30 metres above ground at locations in Causeway Bay, Wan Chai and Admiralty.

By analysing the photos with the satellite image analysis software, Lee was able to establish the average density of the crowd at the three locations at different times. Multiplying the average density with the total area of the route, he then calculated how many protesters were filling the entire 4km route when the people at the front reached the end. [Source]

As it turns out, the numbers differ in part due to the fact that they were counting different things. The police, for example, didn’t try to measure the total number of participants—instead, they focused on counting the maximum number of marchers at any given moment. By contrast, the protest’s organizers say they included those who left early or joined the march through side streets along the four-kilometer route.

The estimates were also conducted with varying statistical rigor. Rally organizers obtained their figure through three teams of volunteers performing a manual count at various points along the route. To include the protesters that took part on side streets, organizers simply multiplied their original count by 1.5.

The University of Hong Kong, which provided an independent estimate, put turnout at between 154,000 and 172,000 people. Researchers led by Dr. Robert Chung, director of the Hong Kong University Public Opinion Program, manually counted passers-by at a checkpoint and subsequently conducted a random telephone survey of Hong Kong residents to check their count. [Source]

The day after the rally, Evan Fowler at The House News looked at the historical differences in turnout estimates presented by rally organizers, academics, and the Hong Kong police, before giving his own on-the-ground impressions and conclusions:

Analyzing the counts since 2005 the CHRF figure is consistently the highest, and the police estimate (and lets call it an estimate as it makes no claim to be a count) always the lowest. What is curious however is that the police figures tend to be far less as both a percentage of the CHRF and POP figures the larger the demonstration.

Between 2005 and 2011 when the POP figures were low, varying from 18,000 (2008) to 63,000 (2011), the police estimates were with the exception of 2007 consistently around 80% of this number. However since 2011, and as the protest numbers have increased, the police figures have been consistently in the 60s%, some 20% lower. This year the police estimate was on 56.7% of the POP count. The police estimates have been further off the POP count in more recent years and when protests are large. This is curious, given that the police have also been more disciplined in controlling marches and demonstrations one would have expected their estimates to be more rather than less in line.

Comparing the CHRF figures with those from POP we also see a consistency between 2005 and 2011. POP numbers were on average around 60% of those stated by CHRF. Since 2011 this figure has dropped to an average of 25% until this year when it increased to 31.7%. Clearly the organiser has in years in more recent years when the turnout has been underwhelming sought to inflate figures.

So by taking the POP count as a base it seems that both the CHRF and the police have veered more to the extremes in their figures since 2011. If this warrants criticism of the CHRF, a openly political group, what should we think of the police, who for the public interest are meant to remain neutral?[Source]

The differences between the various estimates since 2003 were also visualized in an SCMP infographic last week.

While Fowler was willing to take the HKUPOP figure “as a base,” Suzanne Pepper at China Elections and Governance argued that both the Hong Kong Police and the HKUPOP may have underestimated the turnout:

At least this time, the police were honest enough to say their numbers were estimated at the start meaning when the main body of marchers had gathered and were ready to set out: 98,600. This would be about right: all six Victoria Park soccer pitches were packed and the adjacent lawn area was filling up fast … just like a month ago for the June Fourth candlelight vigil when people sit on the spot and do not move about (June 6 post). The police figure then, for the number of people gathered on that site for that one event was 99,500 (Ming Pao, SCMP, June 5). But as the 98,600 began leaving the park at 3:30 p.m. on July First, others were still pouring in. The park and pitches were not cleared until the last stragglers moved out at 7:30 p.m., and they did not reach the final downtown destination until 11:00 p.m.

Additionally, those not inclined to wait for hours on the pitches and lawn … in 90-degree heat, with humidity to match, intermittent downpours, and no shade … were already filling the sidewalks along the route for many blocks beyond the park by 3:30. […]

[…] In 2004, HKU POP began relying on more “scientific” methods of camera spotting and selective monitoring along the way rather than attempting a direct headcount of those leaving the park. Like the police, the HKU POP teams and Professor Paul Yip who oversees the July First monitoring project have never given an adequate explanation of their calculating methods … including the extent to which crowds outside the park are also counted … and what is done with the camera count taken near the Admiralty subway station when everyone knows the drop-out point for many marchers is the previous Wan Chai station.

If they are trying to count the numbers present at the end of the march by comparison with those at the start and the number who walk from start to finish, then they need to clarify. Statistical computations and averages are fine as far as they go. But in this case, as everyone also knows, feet on the ground are being substituted for votes in ballot boxes that Hong Kong does not have. So it follows that every pair of feet counts. At least that’s what the people who take the trouble to march every year like to think. [Source]

Read more about the rally and next steps for Hong Kong’s protest movement, via CDT.