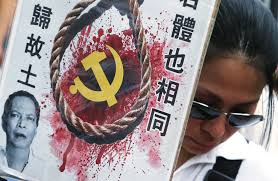 Hundreds of thousands of protesters rallied in Hong Kong for the annual July 1 march marking the anniversary of the handover to mainland rule in 1997. This year’s march was expected to be among the largest in Hong Kong’s history, given rising concern over Beijing’s role in governing the territory. Opposition to the government’s recent white paper on Hong Kong was at the forefront of protesters’ slogans along with calls to reform the election process for the chief executive, the topic of a recent unofficial referendum. From the BBC:

The annual rally, marking the day Hong Kong was returned to China in 1997, is to demand full electoral freedom.

It comes after an unofficial referendum on how to choose Hong Kong’s next chief executive drew close to 800,000 votes.

[…] Organisers expect more than half a million people to join the rally from Victoria Park to the city’s Central district. Roads around the park were closed off and footage showed key roads jammed with marchers.

Several campaign groups have also indicated that they will stage peaceful overnight vigils after the march, which kicked off at 15:00 local time (07:00 GMT). [Source]

A nearly solid river of protesters — most of them young — poured out of Victoria Park through the afternoon and into the evening, heading for the heart of the city. The sea of protesters showed their determination by waiting unflinchingly and with barely a complaint for hours under a succession of deluges just for their chance to walk through the skyscraper-lined canyons of downtown Hong Kong, carrying banners calling for the introduction of full democracy and “Say No to Communist China.”

[…] Tuesday’s march appeared to rival in size the largest democracy march in Hong Kong’s history, held in 2003 when the combination of the outbreak of the deadly SARS virus and a six-year decline in the housing market produced widespread discontent. The 2003 protest drew at least 500,000 people, according to organizers, while the police estimated that 350,000 were on the streets at the peak of that seven-hour march.

The organizers of Tuesday’s march initially said that their gathering had exceeded the crowd in 2003, and later said that a million of Hong Kong’s 7 million people had participated. There was no immediate estimate from the police.

The march stayed peaceful through the afternoon, but tempers began to fray by early evening. The police accused the organizers of not letting the front of the march move fast enough, but limited the march to half of a six-lane artery through the middle of the city, trying to keep the other side open for traffic and emergency vehicles. A rancorous crowd formed after sunset near the Sogo department store in the retail heart of Hong Kong island, demanding that the police open the other half of the road; the police resisted and reinforced their ranks with three rows of officers. [Source]

The South China Morning Post is providing live updates of the rally.

Greg Torode, James Pomfret, and Benjamin Kang Lim report for Reuters on the context of tightening controls over Hong Kong:

In China’s opaque political system, it is impossible to determine whether the party’s growing clout in the territory is entirely the result of a campaign organised from on high, or partly the doing of mainland and local officials eager to please Beijing. Still, a tougher line on Hong Kong is coming from the top.

Despite promises that post-handover Hong Kong should enjoy a high degree of autonomy, China’s President Xi Jinping, is said to have decided that Beijing has been too lenient.

“Xi Jinping has rectified (China’s) policy for governing Hong Kong,” a source close to the Chinese leader told Reuters in Beijing, requesting anonymity. “In the past, the mainland compromised toward Hong Kong too much and was perceived to be weak.”

Beijing opposed the rally and propaganda officials promoted reports that the Hong Kong protests were linked to the CIA. CNN reports on the Chinese government’s reaction:

The Hong Kong and Macao Affairs Office of the State Council emphasized on Monday that the referendum is “illegal and invalid.” The following day the Chinese edition of the Global Times, a state-run publication known for its uncompromising op-eds, published an editorial warning that recent pro-democracy activities — including the referendum, as well as the upcoming rally and sit-in, are polarising Hong Kong society.

The article urges Hong Kong people not to be “kidnapped” by the radical opposition.

Another state mouthpiece, the English-language China Daily, points out in an article that political forces calling for full autonomy in Hong Kong are ignoring economic realities.

“Without the mainland, (Hong Kong) would be left with only half of its trade, one-fourth of its foreign investment and visitors, not to mention only one-tenth of its water and food supply,” the piece says. [Source]

Arrests continued in central Hong Kong at least until 8am, the time protest leaders had aimed to continue the demonstration until.

When the clock struck 8, a cheer went up from the about 50 demonstrators left sitting in Chater Road as well as gathered supporters. The protesters then dispersed, with some arrests made. [Source]

Police estimated 92,000 people attended the rally, but other participants and observers said that was a gross underestimate. Organizers have put the total at 510,000:

Police: 98,600 people were marching at the peak in Hong Kong. Police not providing time of peak or estimate of total participation in march.

Watch a time-lapse video of the marchers leaving Victoria Park:

7pm in Hong Kong and still a vast crowd at starting point of march: gonna be a long night pic.twitter.com/MGCjzgtq9x via @JournoDannyAsia

These two are high school students, born after handover, who say Hong Kong should be independent. #HongKong #July1hk pic.twitter.com/uIUUzzi85i