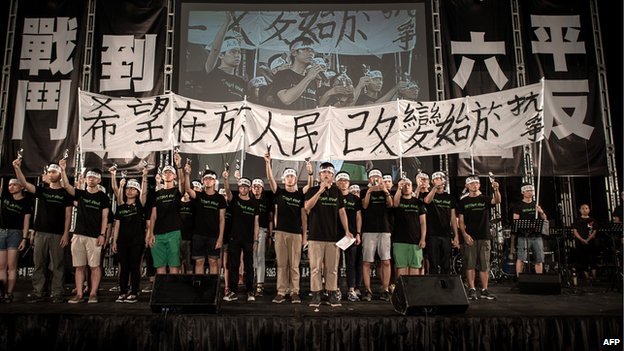 As Tiananmen Square itself was closely policed and gatherings to commemorate the June 4, 1989 crackdown on protesters were forbidden within mainland China, record numbers gathered in Hong Kong for the annual June 4th vigil at Victoria Park. Organizers have put the total at 180,000 people, the largest gathering since 1989. From the South China Morning Post:

[..T]he Hong Kong Alliance in Support of Patriotic Democratic Movements in China put the number in Victoria Park at more than 180,000, well up from the 150,000 reported last year.

Even as the commemoration started at 8pm, thousands of people were waiting to get into the park, with the queue stretching all the way to the Sogo department store in Causeway Bay.

Many travelled from the mainland to join the vigil, with Hong Kong the only place on Chinese soil where people can observe the anniversary in public and on such a large scale.

Some mainlanders who attended crossed the border in order to join the crowd. From Adam Rose and Ben Blanchard at Reuters:

A large number of mainland Chinese also flocked to commemorate the crackdown in the former British territory, where a vigil has been held every year since the massacre. Organizers said some 180,000 people took part on Wednesday evening.

“Hong Kong is a free society where you can speak out. In China, the Communist Party dictates everything,” said Chen Jing Gen, in his 60s, who traveled from the southern Chinese city of Shenzhen to attend the vigil.

“People in mainland China are mostly aware of June 4, but due to the control of the Party no one dares to talk about it.” [Source]

And from Clement Tan and Natasha Khan at Bloomberg:

Visitors to the event at Victoria Park were greeted with loudspeakers broadcasting slogans and banners demanding an end to the rule of the Chinese Communist Party. A human-sized Goddess of Democracy statue stood in the park, where many were sitting. As night fell, hundreds lit candles and observed a moment of silence at 8:38 p.m. after organizers placed wreaths to commemorate those who lost their lives.

“Democracy is not just a dream of our generation,” said Christopher Wong, 26, a Hong Kong resident at the park. “It’s something that those that came before us fought for. Now it’s up to our generation not to give up on democracy.”

[…] “Why am I here? Because we can express our views here but not in the mainland,” said a 42-year-old man who identified himself only by his surname Hong. “After all these years, it’s only right that we come to pay our respects to the many who have died and to preserve their memory.”

Hong, who lives and runs his own business in Guangdong, said residents of the southern Chinese province are lucky because they get information from neighboring Hong Kong, which is how they know about June 4.

In addition to attracting a larger crowd, this year’s vigil also drew a younger demographic, with many participants attending for the first time. Keith Bradsher at the New York Times reports:

The crowd that gathered Wednesday night in Victoria Park in Hong Kong was visibly younger than in previous years and included, for the first time, Cardinal Joseph Zen, a widely admired Roman Catholic priest who in the past had held prayers near the commemoration but not taken part.

In recent years, the gathering had been dominated by people age 40 or older who remembered coverage of the night of the crackdown and who sometimes brought their children. That demographic profile appeared to have been upended this year, as people in their 20s and 30s predominated. An announcer on the stage asked all those attending the vigil for the first time to raise their hands, and many sprung up.

One first-time attendee, Rex Liu, a 27-year-old office worker, said that although he felt regret that students had died 25 years ago, he was motivated more by concern about the prevalence of corruption in current-day China. “I feel the need to come this year to express my discontent over the rotting and corrupt state of the Chinese government,” he said. [Source]

Young people in Hong Kong are increasingly showing concern for human rights issues in China, despite evidence that calls for redress of June 4th are declining. A new June 4th museum in Hong Kong attempts to increase knowledge and awareness of the 1989 protest movement and crackdown among both Hong Kong residents and visiting mainlanders. From The Economist:

Some participants worry that Hong Kong is losing interest in seeking redress. The proportion of respondents who agreed with the statement “The Beijing students did the right thing” fell to 48% this year from 54% a year ago, according to a poll by Hong Kong University. Only 56% of residents want the central government to overturn its official stance that a counterrevolutionary rebellion had threatened the nation, which is seven percentage points fewer than a year ago.

Older participants in the crowd expressed anxiety that the younger generation who had not experienced the 1989 events first hand would not care about preserving its memory. But in the University of Hong Kong poll, support for Tiananmen activists was strongest among those under 30. Dennis Yip, a member of the Hong Kong Federation of Students, said his classmates are “taking up the torch of what Beijing students started 25 years ago”. [Source]

In the past year, Hong Kong residents have expressed growing concern over Beijing’s political influence in the territory, following the arrest of a Hong Kong-based publisher and a brutal attack on a journalist. At the Washington Post, Simon Denyer asks: “25 years after Tiananmen, is China losing Hong Kong?”

People shouting "shame! shame!" when they saw the video by pro-BJ group saying BJ students left one by one safely in TAM square #HKJune4

Mainlander Mr Li: nth is more important than truth. every mainlander should join the vigil at least once. #HKJune4 pic.twitter.com/E4YCOSRze5