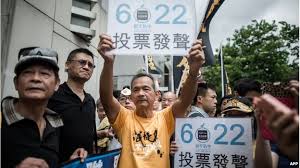 Michael Forsythe and Chris Buckley report in the New York Times that three days into a ten-day voting period “participation in an informal poll to gauge Hong Kong’s desire for democracy is exceeding expectations” with more than 600,000 votes cast Sunday:

Organizers had said publicly that they hoped for at least 100,000 participants in a poll that has been condemned as “illegal and invalid” by the central government in Beijing. Most votes have been cast online, through a website or by smartphone, but on Sunday polling centers opened across Hong Kong, and people voted in curtained booths.

The poll is nonbinding and does not have the backing of the Hong Kong government.

People who participate are choosing among three possible methods for selecting Hong Kong’s chief executive, the city’s top official. The current holder of that office, Leung Chun-ying, said on Friday that none of the proposals would be permitted under the legal framework set up to govern Hong Kong following its 1997 return to Chinese sovereignty. The group overseeing the poll, Occupy Central With Love and Peace, has vowed to disrupt the city’s main business district if the Hong Kong government, in consultation with Beijing puts forth a nomination plan that doesn’t meet international standards for free and fair elections.

While China has agreed to allow Hong Kong to pick the chief executive by universal suffrage in 2017, the referendum’s organizers say that the nomination process will be skewed to only allow a vote for a Beijing-approved candidate. The three proposals being voted on in the informal poll all allow for candidates who may not be acceptable to Beijing to find their way onto the ballot. The Chinese government has final approval of any official Hong Kong election result. [Source]

An editorial in the official Global Times reflected Beijing’s response to the poll:

The opposition groups and their overseas supporters have overestimated the effect of an illegal farce. Neither China’s central government nor the Hong Kong government will admit the results of the poll. It would be ridiculous to determine the direction of Hong Kong’s political reform with this informal referendum.

As a special administrative region of China, Hong Kong can’t launch any referendum without the authority of the central government. The country would fall into tumult if all regions conducted similar referendums.

In particular, the electronic poll by Hong Kong’s opposition groups seems like a joke where it is highly possible to cheat. Who knows how many votes were fabricated?

Throughout the world, we have never heard of making major political decisions via an electronic ballot. This “invention” is tinged with mincing ludicrousness. [Source]