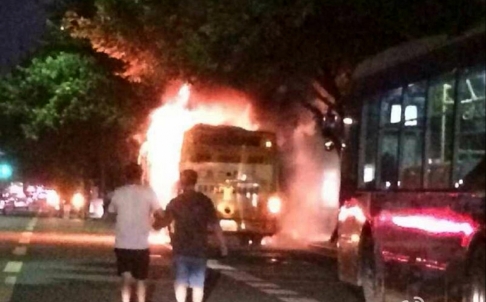 The South China Morning Post reported on Tuesday that police had arrested a 25-year-old man from Hunan named Ou for setting fire to a bus in Guangzhou. The resulting explosion killed two passengers and injured 32 more. A now-deleted article in the Southern Metropolis Daily [Chinese] outlined the laborer’s life story, reporting that his “extremely ordinary”  life changed drastically after suffering from an occupational disease and racking up substantial gambling debt. A report from the Straits Times explains how this arson attack—and many similar acts of violence carried out by disgruntled citizens in recent years—fits into a public debate about rapid economic development in China:

These crimes, known as “revenge on society” acts, have ignited a debate in China about the negative side effects of its rapid economic transformation of the past few decades.

The rush to get rich has weakened the social fabric, say analysts, who point to the lack of social and mental health support for migrant workers uprooted to big cities such as Guangzhou.

[…] Social tension in China is escalating because the cake has not been divided equally and those at the bottom feel they are always losing out.” [Source]

Mental illness is often cited as a cause for violent incidents in China. Meanwhile, with security measures tightening nationwide in the wake of a string of recent attacks blamed by the government on Xinjiang separatists, Beijing has ordered that media follow the official line on “terror attacks, trouble caused by mental disorders, or police shootings.”