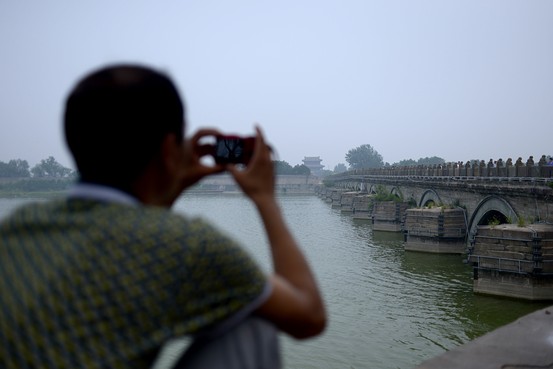 A month after Beijing avoided addressing its own history of 25 years ago, China Real Time’s Te-Ping Chen reports on the Chinese government’s “amped up treatment” of this year’s July 7 commemoration of the Marco Polo Bridge incident. The clash marked the start of China’s War of Resistance against Japan in 1937.

President Xi Jinping led other members of the leadership to the area on the western outskirts of Beijing where 77 years ago Japanese troops attacked Chinese soldiers. The 1937 skirmish led to Japan invading much of eastern China — it had already occupied northeastern China — and triggered a wider conflict that ended eight years later with Japan’s defeat at the end of World War II.

Mr. Xi called on people to remember history in a speech at the site, known to many foreigners as the Marco Polo Bridge, which now features a Museum of the War of the Chinese People’s Resistance Against Japanese Aggression. “If anyone wants to deny, distort or try and beautify this history of invasion, Chinese people and people around the world won’t accept this,” he said.

At the South China Morning Post, Andrea Chen and Lawrence Chung elaborate on Xi Jinping’s official speech denouncing Japan’s wartime atrocities, which have been a special focus of this year’s commemoration as Shinzo Abe controversially moves to roll back elements of the country’s post-war pacifist constitution.

Xi joined more 1,000 people at a ceremony in Beijing to mark the 77th anniversary of the Marco Polo Bridge incident which sparked the war.

Besides stepping up its campaign against Japan’s lifting of its post-war ban on overseas military operations, commentators said Beijing held the unusually high-profile ceremony in a bid to try to unite the people of the mainland and Taiwan against Japan’s wartime atrocities. “No one can revise history and truth,” Xi said during the ceremony. “Chinese people who made great sacrifices [during the war] would never allow anyone to play down [Japan’s] wartime atrocities.”

Accompanied by Nationalist war veteran Lin Shangyuan, a member of the Revolutionary Committee of the Kuomintang, one of eight registered minor non-communist parties on the mainland, Xi unveiled a statue named after the Medal of Independence and Freedom awarded to Sino-Japanese war veterans.

Premier Li Keqiang also raised the issue of the Sino-Japanese war during a press conference with visiting German Chancellor Angela Merkel yesterday, saying learning from the past promised a brighter future. [Source]

While Abe expressed “my most sincere condolences” to the Australian parliament for those the country lost during the war, Merkel resisted efforts to set up an unfavorable comparison between Japan and Germany. From Teddy Ng at South China Morning Post:

German Chancellor Angela Merkel said yesterday it was necessary for her country to reflect upon its wartime history even though the process was painful.

Merkel made the remarks in an address at Tsinghua University before wrapping up her three-day China visit, but added that she was not pointing a finger at Japan.

[…] Ding Chun , an expert in European affairs at Fudan University, said Merkel’s remarks did not indicate Germany was siding with China to exert pressure on Japan, with whom Germany also had close economic relations.

“But her remarks will be well received in China, [and] will not cause a diplomatic stir in Japan because she is commenting in response to a question,” he said. [Source]

The anniversary was a hot topic on Sina Weibo, the popular microblogging service seen as China’s Twitter. Tonghuashu De Xinyuan urged China’s leaders to move on for the better:

We should not live in pain and hatred, what we should do is to have good leaders to lead us and make China stronger and united. We will not be bullied and trampled on so long as we have a prosperous nation and affluent people.

Luo Changping, a former investigative journalist with a large fan base on Weibo, posted a picture of the First World War memorial in Berlin, suggesting that Japan should learn from Germany in reflecting on the history:

This is the memorial of the First World War in Berlin, learn from Germany when it comes to reflection on history. # Commemorating the July 7 incident

Hu Xijin, editor-in-chief at the nationalistic Global Times, wrote about the importance of the anniversary:

To mark the 77th anniversary of the July 7 incident represents the positive energy of China. It makes people reflect on the national disaster and helps us better understand today. Those who ridicule this anniversary might intentionally want to make themselves unique and show a logic that transcends national interests. I don’t get it sometimes that such “diversified opinions” will be any cuter in the face of pure major issues of right and wrong. [Source]

At Foreign Policy, Bethany Allen-Ebrahimian notes that some Chinese frowned on the Party’s efforts to “co-opt history to glorify itself”:

[…] One Weibo post by party mouthpiece People’s Daily commemorating the anniversary was re-tweeted over 50,000 times and garnered more then 8,300 comments. But far and away the most up-voted comment on this post read, “The anti-Japanese war had nothing to do with your most honorable party” — a reference to the officially ignored fact that the then ruling Nationalist Party led the wartime effort against Japan. State-run television broadcaster China Central Television also posted a series of wartime photos on its Weibo account. The most popular response read “Never forget that the legal government of China at that time was the Republic of China, and China’s supreme commander was Chiang Kai-shek,” the wartime Nationalist leader now vilified by the party. Hu Xijin, outspoken chief editor of the fervently nationalist newspaper Global Times, defended historical memorializing in a widely read post on July 7 — but the top-rated comment blasted Hu for turning the Marco Polo Bridge incident into a “political tool,” brandished whenever relations with Japan became especially strained. [Source]

Xinhua also reports on the sculpture Xi unveiled commemorating the start of the War of Resistance, while SCMP highlights newly announced plans for the expansion of the Unit 731 War Crimes Museum. The museum occupies part of a site in Harbin where the Japanese military tested biological and chemical weapons on Chinese, Russian and other civilian and military prisoners.