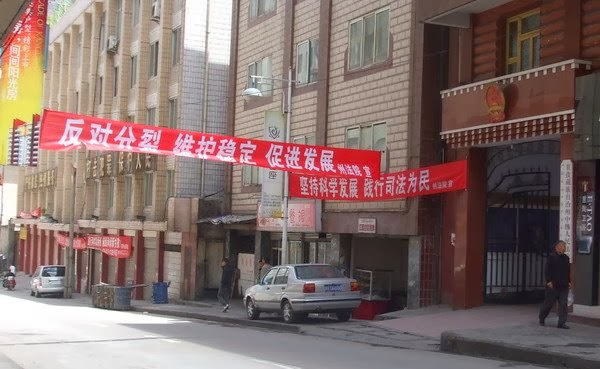 The situation in Tibet rarely attracts much attention among Han Chinese outside Tibetan areas. When it does, it is often viewed (as in the West) through the flawed lenses of crude stereotypes. In December 2012, New Citizen activist Xu Zhiyong expressed sorrow in The New York Times at the lack of support for Tibetan self-immolators from Han Chinese. In a pair of December 2013 essays newly translated at High Peaks Pure Earth, though, Tibetan writer Woeser highlights the small group of Chinese rights lawyers who have attempted to take on sensitive Tibetan cases in recent years:

As I documented in my book “The Snow-Lion Roaring in the Year of the Mouse: A Chronicle of the Events in Tibet of 2008”: “There are 21 Chinese lawyers who are willing to help arrested Tibetans by giving them legal aid; on a jointly signed document they wrote: “According to reports from within the country, hundreds have already been arrested for the ‘March 14’ incident which occurred in Tibetan areas. As professional lawyers, we hope that the departments concerned will deal with arrested Tibetans in strict accordance with the Constitution, laws, and related criminal procedures; put an end to the extortion of confessions by torture; respect the independence of the judiciary; and uphold the honour of the law. We express here that we are paying close attention to related cases, and are willing to offer legal aid to arrested Tibetans”. But the lawyers who jointly signed this document were immediately confronted with a strict warning by the local officials, telling them that they were not allowed to intervene in any legal cases concerning Tibetans.

The outside world might not be so aware that the whole of Tibet is a world without justice, that Tibetans have been deprived of their legal right to protection, that many Tibetans are facing unfair legal hearings; but the outside world might be equally unaware that there are a number of genuine Chinese lawyers who have for many years been going through the difficulties of helping Tibetans defend themselves and the truth. Just as Teng Biao, the human rights activist who lost his legal license because he had signed that document, said: “In terms of human rights, in terms of every aspect of the most basic rights, Tibetans suffer from more obvious and more severe oppression than Chinese… For Chinese, cases such as the ones of Xu Zhiyong and Liu Xiaobo are considered sensitive. But for Tibetans, all cases are sensitive.”

As someone who documents events, I would like to briefly introduce some of the cases that I know of[.] [Source]

Besides Teng Biao, the lawyers include Pu Zhiqiang, recently arrested for allegedly “causing disturbance and illegally obtaining personal information”; Jiang Tianyong, one of four lawyers who say they were detained and tortured while investigating an alleged black jail in Heilongjiang this spring; and Li Fangping, who is currently defending Uyghur scholar Ilham Tohti against separatism charges.