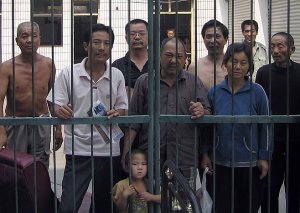 Amnesty International and Human Rights Watch have called for an official investigation into four lawyers’ claims that they were tortured after being detained in China’s northeastern Heilongjiang province, where they were investigating an alleged black jail.

The lawyers allege that the police tortured them in order to extract confessions, which is expressly prohibited in Article 50 of the People’s Republic of China Criminal Procedure Law. During detention at the Daxing District Public Security Bureau, Tang Jitian, Jiang Tianyong and Wang Cheng wrists were tied behind their backs and they were hung by their wrists, lifting their feet off the ground. They were then beaten and kicked in the chest, head, back and legs. The police also threatened Tang Jitian that they could “harvest his kidney alive” and “dig a hole and bury him”. Tang Jitian also recounted that he was beaten with a bat that had some soft materials attached to it, which he believes was to inflict pain but cause minimal bruising.

Previously, Zhang Junjie who was released on 27 March after five days in detention, posted testimony online containing details about his torture.

[…] Dozens of supporters of the lawyers have been harassed and briefly detained by the police when they attempted to visit or get information about the lawyers and 15 of them are still detained: Jai Yanmin, Jiang Jianping, Zhang Rongping (Zhang Xingyu), Sun Dongsheng, Li Baolin, Chen Jinxin, Yuan Xiancheng, Li Fawang, Liang Yan, Zhao Yuan, Zhang Xiqing, Liu Xing, Li Dawai, Zhang Yan and Qi Jinchun. Amnesty International is urging the authorities to release them immediately and unconditionally. [Source]

“The torture of human rights lawyers in police custody isn’t just an assault against the individuals concerned, but also against the legal profession,” said Sophie Richardson, [Human Rights Watch’s] China director. “Without an independent investigation and accountability for the abuse, the government’s rule of law rhetoric rings very hollow.”

[…] “Just a few weeks ago Chinese officials went before the United Nations Human Rights Council and insisted that there is no harassment of human rights lawyers,” said Richardson.  “Proving good faith on that matter requires an immediate, independent investigation, and that targeting of lawyers for doing their work ends now.” [Source]

The New York Times’ Didi Kirsten Tatlow explained the background of the detentions:

The men had traveled to Jiansanjiang to protest what they called a “legal education center” — the city’s “Land Cultivation General Office Legal Education Base,” one of many in China. The lawyers and rights activists say the centers are associated with the Communist Party’s 610 Office, which Mr. Jiang said has branches “from the central government down to the localities.”

The 610 Office was set up to deal with followers of the Falun Gong spiritual movement, which was banned in 1999 as an “evil cult” after it staged demonstrations outside Zhongnanhai in Beijing, where the top leaders live and work.

Mr. Tang said the lawyers believe that “about five or six” Falun Gong adherents are in the facility.

[…] “That we defend them doesn’t mean we agree with their beliefs,” Mr. Jiang said. However, “from a legal point of view, faith is a basic right. You can’t criminalize someone because of their religious beliefs.” [Source]

See also an earlier report from Tatlow and more on the case at Siweiluozi’s blog. China’s State Council Information Office has ordered that all information relating to the detentions be removed from the web.