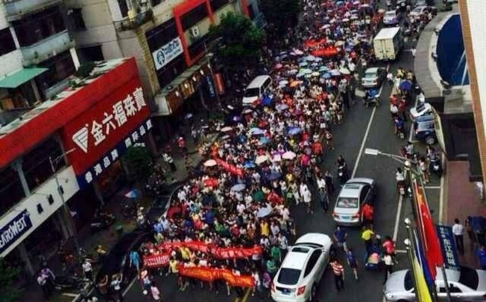 Over the weekend, thousands of residents of Boluo County, Guangdong took to the streets to protest a planned garbage incinerator, which they feared would pump pollutants into the air and water. Chris Buckley at the New York Times reports:

A street march broke out on Saturday in Boluo County, Guangdong Province, and three residents contacted by telephone said the protest had resumed on Sunday, when people again walked toward government offices in the main town, despite a police announcement issued through the domestic news media that 24 people had already been detained. The residents spoke on the condition of anonymity, citing fears of arrest.

“We strongly urge the government authorities to reconsider the siting of the waste incineration plant,” said an appeal against the project that spread on the Internet in China. One of the Boluo residents who helped with the appeal confirmed it had come from there.

If the plan went ahead, the letter said, there was “the risk of an expanding and deepening conflict.”

The conflict brought into local focus a much wider problem across China: the chasm of distrust between a government struggling with mounting garbage from homes and industry, and a public that often has little confidence in official promises to cleanly dispose of that trash. The conflict is especially acute in southern China, which is dense with people, industry and expanding cities. [Source]

AP has more on the protests, which went into a second day on Sunday:

Chen said he was among protesters who marched about 2 kilometers (about a mile) to the county government office in Luoyang town Sunday morning. At its peak, he estimated 3,000 to 4,000 people took part and he saw police with shields and batons take away three people who had thrown water bottles at them.

At the county offices, an official came out with a loudspeaker to tell the crowds that the government had not yet decided on a location for the incinerator, Chen said, adding that crowds had begun to disperse. “We have expressed our opinion,” he said by phone.

Huang estimated that about 1,000 people were gathered outside the offices, holding banners and chanting slogans, including “Protect our homeland” and “Drive out the garbage incinerator.” Some anti-riot police holding batons guarded the area, which had been blocked off to traffic, he said. [Source]

While the protests were reported to be largely peaceful, 24 people were detained for “disturbing public order,” Reuters reports:

Some of the protesters “disturbed social order” and “caused heavy traffic jams”, the newspaper quoted police as saying.

Police would deal leniently with law-breakers who surrendered themselves or informed against others within three days, it said. Eight of those detained were later released.

“The protest was organized by a handful of lawless people and participated in by people who did not know the truth,” the newspaper quoted a statement by police in the area as saying. [Source]

Footage of the protest has been posted on YouTube by Revolution News:

According to a Xinhua report, which refers to the planned project as an “ecological garden,” authorities have not decided on a final plan and will take public opinion into account:

A draft of the plan was published in the Huizhou Daily on August 16 and will be posted on the city’s housing and construction bureau website for one month. Specialist agencies are also conducting survey and evaluation work on the project’s environmental implications and geological conditions.

Government authorities will hold a demonstration meeting and hearings with the participation of local residents and experts. The demonstration and final decision will be made in accordance with the law and legal procedures, said the spokesman.

The municipal government of Huizhou will give full attention to the site selection and is soliciting opinions from all sides to make a law-based scientific decision, he added. [Source]

Garbage incineration has long been a hot button issue for environmental activists and other residents concerned about pollution. In May, protests against an incinerator in Hangzhou turned violent with dozens injured.

The ubiquitous environmental degradation that has accompanied China’s economic growth has awakened a public consciousness of environmental issues, which some believe could lead to major political change. In the New York Times, Daniel K. Gardner argues that in the past year alone, a number of ecological crises have spurred activism which has in turn led to policy changes aimed at cleaning up China’s filthy air and water:

China today — as it begins to come to terms with air, water and land befouled by three decades of industrialization — bears some resemblance to the United States of the late 1960s. The Chinese are beginning to wonder, just as Americans did back then, whether “industrial progress” has come at too high a cost to the environment. Attitudes in China are changing.

This growing anxiety is reflected in the rising frequency of environmental protests. In the past year, people have taken to the streets in cities throughout the country to protest the building of coal-fired power plants, chemical plants, oil refineries, waste incinerators, and the like. According to Chen Jiping, a former leading member of the Communist Party’s political and legislative affairs committee, pollution is now the leading cause of social unrest in China.

[…] China’s environment is a disaster. But by casting a bright light on the country’s severe pollution problems, the crises of the past year have stirred a greater environmental consciousness in the people. At the same time, they have spurred the country’s leaders to take more aggressive environmental action. [Source]

Read more about the environment in China, via CDT.