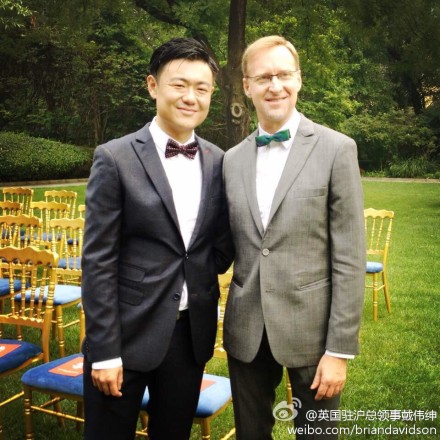 Last weekend, Britain’s consul-general to Shanghai married his same-sex partner at the British ambassador’s residence in Beijing. In June, the Foreign Office announced that overseas diplomatic missions can conduct same-sex marriages for British citizens in over 20 countries; while Beijing approved the move, Hong Kong did not. From The Telegraph:

Brian Davidson, the consul general of Shanghai, and Scott Chang wore bow-ties and matching slippers as they wed in front of around 60 guests at the weekend.

Gay unions are not legal in China, where the government adopts a “three nots” approach to homosexuality: not approved, not disapproved, not promoted.

[…] “I think it also shows that modern Britain is quite different from many people’s perceptions,” he added. “The scale of the coverage has been a bit daunting, but it has mostly been very positive. A lot of our Chinese friends have taken it as a positive thing that we are not hiding that we are in love and married.” [said Davidson.]

He said many of the couple’s Chinese friends had asked them to share their wedding. “We have a lot of friends who do not have this kind of opportunity. It was them who asked us to release something on Weibo. […]  [Source]

Tea Leaf Nation rounds up comments from social media, where photographs of the same-sex union quickly went viral, putting them into the context of changing views on homosexuality in China:

In a poll launched Sept. 7 on Weibo, more than 89,000 people voted in favor of same-sex marriage, while just 8,000 opposed it. Reactions to Davidson and Chang’s wedding on Weibo mirrored that ratio, with the vast majority of commenters wishing the couple well. One man in the southwestern city of Chengdu wrote that legalizing same-sex marriage said a lot about a country’s progress on human rights and the rule of law. He said that the wedding at the ambassador’s residence would be a “good example” for China and that he hoped the day would come when such unions were legal in China too. On September 7, Davidson retweeted the Chengdu man’s message to his nearly 40,000 Weibo followers. In his own announcement a day earlier, Davidson had written that he was “very proud” that U.K. law allowed him to marry whomever he loved.

But the majority of posts welcomed the wedding news. One man in Beijing compared the struggle for same-sex marriage rights to movements for women’s voting rights and equal rights for minorities. He added, “Homophobes and morality police can only be part of a backward group in history that obstructs the progress of humanity.” […] [Source]