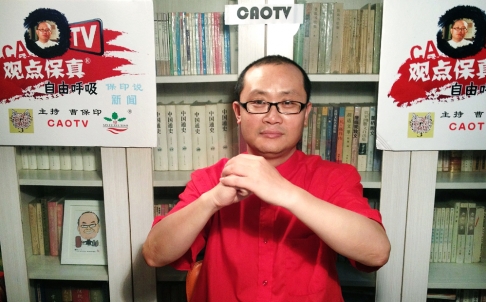 The South China Morning Post reports that writer and columnist Cao Baoyin was detained by police in Nanjing on Tuesday. Cao, a vocal proponent of education reform, lost his job at the Beijing Times earlier this year, reportedly over his outspoken advocacy.

Cao was detained on Tuesday, Zhou Ze, a rights lawyer, confirmed in a Weibo post on Wednesday evening. The post has since been deleted. He did not say whether charges have been put forward.

According to Zhou, Cao called his wife from Nanjing on Tuesday, telling her that he had been detained by police. Zhou and another family friend said police in Beijing’s Fengtai district searched Cao’s home there. A seizure notice by Fengtai police showed that two boxes of books, one laptop and 26 CDs were seized.

It was unclear whether Cao had only been summoned for questioning or whether charges had been pressed. Under Chinese law, police can criminally detain suspects for up to 24 hours without informing the family and up 30 days before formalising an arrest, except in extraordinary circumstances.

[…] Family friends have suggested the writer’s detention could be tied to the closure of a controversial alternative school project in the capital’s southern district.

Cao was a strong advocate of the “new education” model of alternative schooling, which the primary school affiliated with the Fengtai No.2 Middle School in his home district had adopted two years ago. [Source]

The AP reports further on the Beijing school closure and Cao’s connection to it, noting that another parent who protested the closure has also been detained:

Cao and other parents protested the end of the previously government-sanctioned New Education project, which emphasized intensive reading at an elementary school associated with the No. 2 Fengtai Middle School.

Cao was also briefly elected to lead a parent committee at the elementary school, but the committee was quickly disbanded after the school administration refused to acknowledge its legitimacy. The committee had sought increased parental input in school affairs.

Chinese authorities hold monopoly control over most primary and secondary education, but parents are increasingly demanding a voice in school affairs.

On Tuesday, the day Cao was taken away, the district government said several parents had disrupted order by pulling their children from classes. [Source]