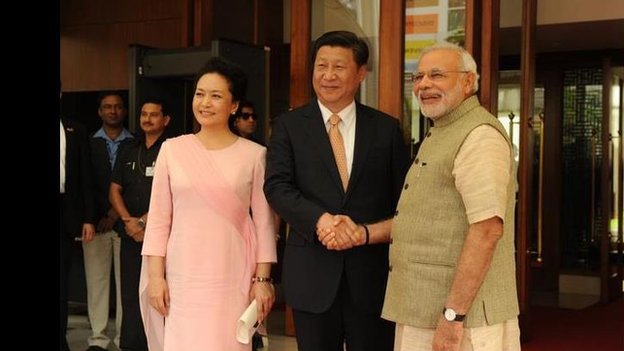 If I have to describe potential of India-China ties I will say- INCH (India & China) towards MILES (Millennium of Exceptional Synergy)!

Xi Jinping arrived today in India on his first presidential trip to the country, where he was personally received by Prime Minister Narendra Modi. Xi’s trip to India marks the first by a Chinese president in eight years, and the third in the modern history of the two nations. A report from the New York Times looks at what’s on the table as Xi arrives in India:

China has the ability to channel billions of dollars into Indian infrastructure and manufacturing projects, allowing Mr. Modi to pursue the job-creation agenda that was at the heart of his campaign. China, meanwhile, needs calm on its southwestern border to offset tense relationships with Japan, Vietnam, the Philippines and the United States. State-run Chinese newspapers have lavished praise on Mr. Modi, intimating that he has the potential to set India on a Chinese-style economic growth trajectory.

But those interests are balanced by deep historical mistrust on security matters.

Indeed, even as India prepared an opulent riverfront dinner for Mr. Xi in Gujarat this week, troops and slogan-chanting civilians were facing off along the disputed border between China and India, where the two countries fought a brief war in 1962. India has discussed beefing up maritime cooperation with the navies of Australia and Japan and proposed tighter defense and energy ties with Vietnam — all moves that could be seen as a challenge to China. Meanwhile, China is building ports and other facilities throughout South Asia, a so-called string of pearls strategy that India views warily. […] [Source]

Prior to his election as Indian Prime Minister in May, Modi had serve as Chief Minister of Gujarat, where he began forming a relationship with Beijing. From the South China Morning Post:

Long before Modi fashioned himself as a national leader, Beijing’s talent scouts zeroed in on him when he began to reach out to China for investment in the western Indian state of Gujarat, of which Modi was chief minister.

The initial attraction was his pro-business approach and a no-nonsense administrative style that makes the state a rare investor-friendly island in a sea of bureaucratic sloth. But Beijing was also acutely aware that, as a rising star in India’s then main opposition party, Modi brought more to the table than an investor’s paradise, and began to cultivate him.

Modi has visited China four times. In 2011, he made a particularly high-profile five-day trip in which he was accorded a welcome generally reserved for heads of state. For his part, Modi carried red visiting cards printed in Chinese. […] [Source]

Modi meets with Xi shortly after an amiable encounter with his Japanese counterpart Shinzo Abe prompted speculation that the Indian leader could be on board to help counter China, a view that others rejected. For his part, Xi stressed Sino-Indian friendship ahead of the trip, and postponed a stopover to longtime ally Pakistan. Modi’s reception of Xi also showed affinity; Xi was met by the Indian leader personally—a rarity for Indian heads of state—on his 64th birthday and in his home state of Gujarat. As Xi and his wife enjoyed an honorific welcome, news of a skirmish on the Sino-Indian border had just broken, putting the countries’ long running territorial dispute on display. From The Guardian:

More than 200 soldiers of the People’s Liberation Army entered what India considers its territory last week and used cranes and bulldozers to build a 1.2-mile road, the Hindustan Times reported.

Indian soldiers challenged the Chinese troops and asked them to withdraw, before demolishing a temporary track they had built, said the report, which has not been denied by Indian authorities.

[…] Though similar incidents occur regularly along the 2,200-mile border, this new faceoff underlines the persistent tensions between the two emerging powers – even if both currently appear eager to improve a patchy relationship. [Source]

Another source of geopolitical tension was also highly visible as Xi arrived. The Wall Street Journal reports that Tibetans in the capital have staged a protest against the visit, and that security is tight in the city:

On Wednesday morning, Indian television network NDTV showed footage of what it described as a group of protesters near the Chinese embassy in New Delhi being escorted away by police while shouting anti-China slogans. At New Delhi’s main Tibetan neighborhood, Majnu Ka Tilla, activist groups reported increased police presence.

A spokesman for the Delhi police, Rajan Bhagat, said that, “Based on our past experience and inputs, we have tightened security in the capital to ensure the Chinese premier’s visit goes on smoothly.” As of shortly after noon on Wednesday, no arrests had been made, he said, adding that security had been tightened “all across the city.”

The Tibetan Youth Congress, an organization calling for Tibetan independence, last week dispatched a letter to India’s new Prime Minister Narendra Modi, urging him to raise the Tibet issue with Mr. Xi. “We believe that a lasting peace and security for India along her Himalayan borders lies only in a free Tibet,” the letter said in part. [Source]

The Indian government reportedly asked the Dalai Lama to reschedule a planned gathering in Delhi that would overlap with Xi’s visit.

Areas of geopolitical contention will likely take the back seat to matters of trade and development in discussions between the leaders. The South China Morning Post reports on why Modi sees economic opportunity in his relationship with China:

Central to the so-called Modinomics is attracting foreign investment and creating manufacturing jobs for millions of young Indians. Between 2004 and 2011, China generated 16 million manufacturing jobs on top of an existing 112 million, says Free University of Brussels professor and author of China and India: Prospects for Peace, Jonathan Holslag. India, in contrast, only created 3 million jobs on an initial total of 11 million. This unemployment problem will only worsen over the years as 6.5 million Indians are expected to join the labour force every year until 2030.

India’s creaking infrastructure and notorious bureaucratic sloth aren’t helping either, forcing even Indian industrialists to look elsewhere. Chinese investment in India amounted to US$657 million in 2012 compared to US$723 million of Indian investment in China. It’s not for nothing that Modi has been asking the world to come and manufacture in India, promising them “red carpet, not red tape”.

China forms an integral component in this jobs focus. As chief minister of Gujarat, Modi successfully drew Chinese capital to his state. Now that he is expected to replicate his so-called Gujarat model of development across the country, he has moved rapidly to remove regulatory hurdles to facilitate Chinese investment on a wider scale. In a country where suspicion of China runs deep, that would require all of Modi’s famed administrative prowess but he has already made substantial progress. [Source]

Xi Jinping too sees economic opportunity in the bilateral relationship. The Hindu published an op-ed written by Xi himself today, entitled “Towards an Asian Century of Prosperity:”

As emerging markets, each with its own strengths, we need to become closer development partners who draw upon each other’s strengths and work together for common development. With rich experience in infrastructure building and manufacturing, China is ready to contribute to India’s development in these areas. India is advanced in IT and pharmaceutical industries, and Indian companies are welcome to seek business opportunities in the Chinese market. The combination of the “world’s factory” and the “world’s back office” will produce the most competitive production base and the most attractive consumer market.

As the two engines of the Asian economy, we need to become cooperation partners spearheading growth. I believe that the combination of China’s energy plus India’s wisdom will release massive potential. We need to jointly develop the BCIM Economic Corridor, discuss the initiatives of the Silk Road Economic Belt and the 21st Century Maritime Silk Road, and lead the sustainable growth of the Asian economy.

As two important forces in a world that moves towards multipolarity, we need to become global partners having strategic coordination. According to Prime Minister Modi, China and India are “two bodies, one spirit.” I appreciate this comment. Despite their distinctive features, the “Chinese Dragon” and the “Indian Elephant” both cherish peace, equity and justice. […] [Source]

For more background on the state of Sino-Indian relations and on Xi’s India trip, see: