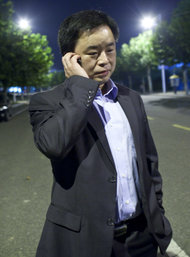 The New York Times quotes Murong Xuecun and his literary agent on the Twitter smear campaign the author has been the target of since late last month:

“It’s amusing to read as bad fiction,” Mr. Murong said in a telephone interview. “Some scenes were written as if the writer were right there, but there is no point-of-view character.”

[…] Mr. Murong said the smear campaign might have been a response to his participation in a small gathering of Chinese intellectuals in Beijing in May commemorating the 25th anniversary of the 1989 Tiananmen Square protests. After some attendees of the gathering were detained, Mr. Murong publicly demanded that he be detained as well. In July, he was detained and released after eight and a half hours.

[…] Mr. Murong said the links were being spread on Twitter, which is blocked in China, rather than on Sina Weibo, the Chinese microblogging service with hundreds of millions of users, probably because he had already lost any meaningful presence on Weibo.

“My Weibo account has been deleted more than 10 times. I no longer have a voice within the Great Firewall,” he said, referring to the system used to control the Internet in China. [Source]

Murong Xuecun is a frequent critic of censorship in China. Many of the accounts that have helped the anti-Murong Xuecun articles to be forwarded over a thousand times are believed to be robots. In July, the advocacy group Free Tibet identified nearly 100 fake Twitter accounts circulating suspiciously cheerful news about life in Tibetan regions of China.