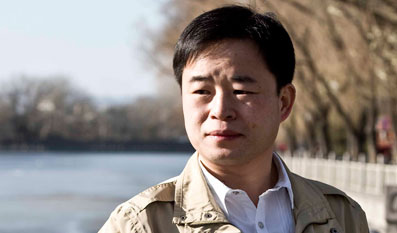 In what appears to be a targeted attack, a ten-part essay smearing Chinese author Murong Xuecun is circulating on Twitter. The essay, “Murong Xuecun’s Previous Life Today” (慕容雪村的前世今生), claims that he is an “inhumane, perverse, fake author” who “foments negative energy in society” and has had several affairs. The essays have been posted and forwarded by newcomers to Twitter with avatars of beautiful young women and men, most likely robots.

Murong Xuecun, who first shared his novels online, is also active in human rights. He was invited to a seminar on June 4th while in Australia. While he could not attend, he publicly supported those who did, many of whom were detained immediately afterward—to show solidarity, Murong vowed that he would turn himself into the police upon his return to Beijing. After arriving home, he was detained and interrogated for over eight hours.

At the Hong Kong news site on.cc, Xiang Xiaokai shares his analysis of seven of the defamatory tweets and the users circulating them [Chinese]. Xiang found that the tweets were retweeted about 800 times each by only 160 users, meaning that each user had retweeted the original post multiple times. He also found that the retweets occurred just 20 minutes after the original went up, with retweets following each other in approximately ten-second intervals. All of the users sharing these salacious “details” on Murong Xuecun had opened their accounts on or after January 1, 2014, with nearly 80% were opened after June 1. The users have around 100 followers each, and seem to have formed a “closed community of mutual followers.”

Xiang concludes that these users are robots, accounts set up such that a tweet from one triggers retweets from the others. This concentrated retweet attack “spreads these messages to other users’ timelines in an attempt to get more overseas users to retweet and disseminate” the smear campaign.