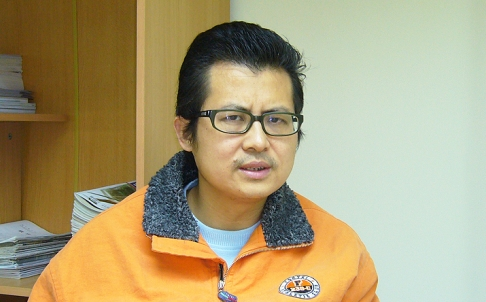 Dissident writer and human rights legal activist Yang Maodong, better known by his pen name Guo Feixiong, was detained in August of 2013, formally arrested two months later for “gathering a crowd to disrupt order in a public place,” and finally allowed access to legal representation in November of 2013. The New York Times reports that the activist’s trial is expected to begin on Friday in Guangzhou, and that his lawyers and family members are expecting conviction and imprisonment:

Mr. Yang, who is better known by his pen name, Guo Feixiong, will be the latest prominent rights advocate to go on trial for his part in small but attention-getting protests that rippled across China starting two years ago, when Xi Jinping assumed leadership of the Communist Party. One of Mr. Yang’s lawyers, Zhang Xuezhong, said a court official in Guangzhou, the capital of Guangdong Province, had notified him that Mr. Yang and another defendant, Sun Desheng, would be tried on Friday.

“We’ll be defending him as innocent,” Mr. Zhang, a lawyer in Shanghai who lost his job as a university lecturer after his outspoken advocacy of free speech, said by telephone.

“This doesn’t amount to a crime, but taking into account the current political situation, I can only say that I’m not at all optimistic about the outcome,” Mr. Zhang said. “But as his defense, we’ll do our best to demonstrate his innocence.”

[…] A writer and businessman, Mr. Yang was previously convicted and imprisoned in 2007 on a charge of illegal business activities related to his publishing work, an accusation that he and his supporters called a pretext to stifle his activism. He was released in 2011. This time, he and Mr. Sun each face a maximum sentence of five years in prison, said Mr. Zhang, the lawyer. [Source]

The charges against Yang Maodong and Sun Deshang stem from their involvement in organizing support for Southern Weekly staff members who protested against censorship at the paper in early 2013. The upcoming trial will be the latest in the Xi administration’s ongoing drive to stifle China’s nascent civil society.