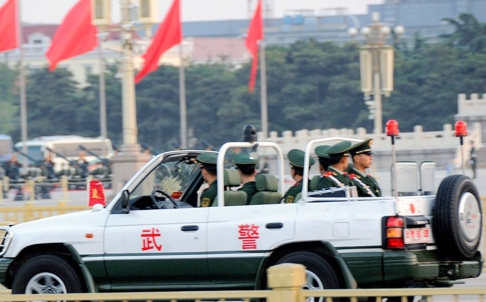 As Beijing prepares to host a series of Asia-Pacific Economic Cooperation (APEC) meetings, state media reports that municipal police have been engaged in “security inspections and preparatory work” for the past eight weeks, and that officials yesterday urged “tight security checks to prevent terrorist attacks” during the meetings. Chinese authorities are currently engaged in a nationwide “war on terror” in response to a rise in violent incidents allegedly carried out by extremists from Xinjiang, amid which eight were recently executed for involvement in an attack on Beijing last year. The South China Morning Post’s Keira Lu Huang reports on security drills in the capital city yesterday:

The drills took place simultaneously at the China National Convention Centre in northern Beijing and at Yanqi Lake, with its 65-hectare island featuring a luxury hotel and villas on the outskirts of the capital, according to the China News Agency.

State media said the operations were designed to test the police response to riots and terrorist attacks.

[…] Officers descended on the sites as the operation unfolded and SWAT teams and armed police took up their positions. Helicopters patrolled the skies and sent live pictures back to the command centre during the 35-minute exercise that was overseen by the chief of the Beijing public safety department.

Meanwhile, security was stepped up around Tiananmen Square, in the heart of the city. […] [Source]

As enhanced security efforts are being made ahead of the APEC summit, authorities are also taking great lengths to control another threat for which Beijing is infamous: air pollution. With heavy pollution season having already exposed Beijing residents to hazardous levels of pollution for a good part of October, Wayne Ma reports on Beijing’s goal to reduce pollution by up to 40% during the APEC gathering. From the Wall Street Journal:

The official Xinhua news agency reported Saturday that Chinese authorities plan to reduce air pollution in and around Beijing by as much as 40% during next month’s meeting of the Asia-Pacific Economic Cooperation forum. That includes alternate-driving days for cars with even- and odd-numbered license plates, Xinhua said, citing Chai Fahe, vice president of the Chinese Research Academy of Environmental Sciences.

This isn’t the first time Beijing has taken measures to improve the air during official visits. In August, the Beijing News reported that the city would heavily reduce the use of government vehicles for two weeks while hosting a meeting of senior officials from the APEC forum.

However, restricting car drivers to every other day is an unusual step for Beijing. It was last used to help improve air quality during the 2008 Olympics. The government hasn’t used the measure since, though officials said last year they would implement it for official use during emergencies. (Beijing still requires many drivers to take their cars off the streets one day a week based on the final digit of their license plate.) […] [Source]

Another tactic being used to meet this goal: shut down the city, and create incentives for residents to leave town. From Bloomberg:

China’s preparations for the APEC meetings go beyond cut-rate travel. Measures such as factory shutdowns are so sweeping that nationwide industrial production growth may be shaved by as much as half a percentage point in October and November, while steel output in nearby Hebei province may fall 10 percent in November.

[…] The measures are aimed at preventing smog from enveloping the city during the event, which will be attended by U.S. President Barack Obama, Japanese Prime Minister Shinzo Abe and Russian President Vladamir Putin. On Oct. 19, pollution levels exceeding World Health Organization limits by 16 times prompted many runners to drop out of the Beijing marathon and drew new attention to China’s difficulty in cleaning its air despite promises to do so. [Source]