8 Executed for Involvement in Tiananmen Crash 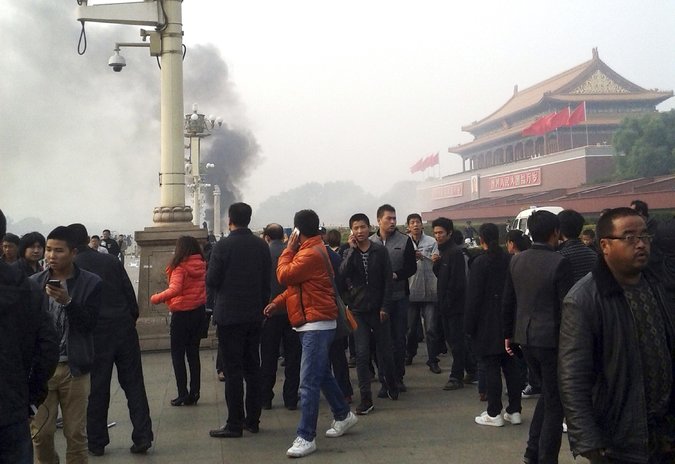 China’s state media announced that eight people were executed in Xinjiang over the weekend for involvement in the jeep crash that killed five near Tiananmen Square in October of last year. Reuters reports:

China has executed eight people for “terrorist” attacks in its restive far western region of Xinjiang, including three who “masterminded” a dramatic car crash in the capital’s Tiananmen Square in 2013, state media said.

[…] Three of the executed group “masterminded” the October 2013 attack in the heart of the Chinese capital, official news agency Xinhua said late on Saturday.

[…] The World Uyghur Congress, the largest group of exiled Uighurs, said the executed individuals had paid a heavy price but the root causes of the issues was being overlooked.

“The lawyers, to accomplish political ends, led them to accept China’s charges, and skirted the causes of the issue,” spokesman Dilxat Raxit told Reuters in an email on Sunday. “It’s a typical case of the law serving political ends.”

A report by China Central Television (CCTV) showed images of police leading into court, and questioning, the individuals who have been executed. It also showed footage of the Tiananmen attack, with a car being driven into the square.

Some of the people executed were blamed for attacks in Xinjiang’s prefecture of Aksu, the city of Kashgar and the town of Hotan, Xinhua added. [Source]

These executions are the latest in Beijing’s ongoing “people’s war” against terrorism, launched after an upswing of violent attacks have been blamed by central authorities on separatists and religious extremists from the western region of Xinjiang, home to the ethnically distinct and primarily Muslim Uyghur minority. Launched in May, the terror crackdown has seen mass public sentencing rallies, a crackdown on “violent Internet content,” the launch of a cash rewards programs for those who aid in tracking down alleged terrorists, and in some areas restrictions on cultural and religious practices such as Ramadan fasting, and the wearing of burkas or facial hair.

While critics of the crackdown have said that increasingly repressive state policies in Xinjiang are fueling unrest, state media has been warning that violence carried out by Uyghurs is an expression of the global jihad movement encouraged from abroad. Following the recent executions, CCTV aired cellphone footage showing a Uyghur man burning the national flags of ten countries. Translated by the South China Morning Post:

At the New York Times, Edward Wong reports that an 18-year-old man was arrested for involvement in the killing of a state-appointed Muslim leader late last month:

Reports from Chinese journalists in Xinjiang, the vast western region that includes Kashgar, said late Sunday that the police had detained the suspect, Aini Aishan, a member of the Uighur ethnic minority, while he was in the city of Khotan, another oasis settlement east of Kashgar. The arrest took place just two days after a fatal knife or ax attack July 30 on Jume Tahir, 74, the Uighur imam of the historic yellow-walled Id Kah Mosque.

The killing of the imam underscored the increasingly bloody nature of the ethnic conflicts in Xinjiang. This year, a growing number of terrorist-style attacks has shaken the region and cities elsewhere in China. The assaults have been linked to tensions between Uighurs, who mostly follow Sunni Islam, and Han, who make up the country’s dominant ethnic group.

The imam was a divisive figure among Uighurs because he was seen by some as a supporter of policies imposed by the central and regional governments, which are run by Han. […] [Source]

Amid heightened sensitivities in Xinjiang, authorities have been tightly controlling the media narrative on violence and the terror crackdown. Also see a report from TIME’s Emily Rauhala explaining how media restrictions make it difficult to gauge the situation on the ground in Xinjiang.