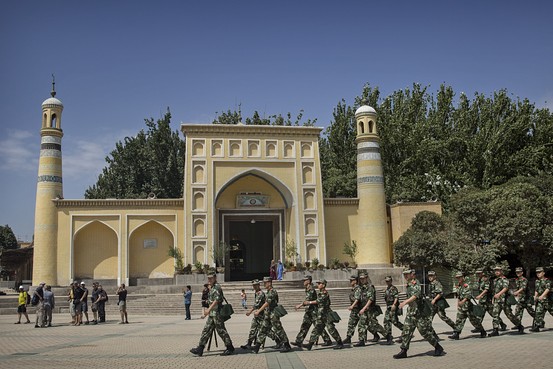 Xinhua reports that police in Kashgar, Xinjiang, have shot dead two and captured a third suspect in the murder of Jume Tahir, vice-president of the Beijing-sanctioned Islamic Association of China:

The killings and arrest happened as the suspects resisted arrest with knives and axes at noon on Wednesday, according to the authorities.

Turghun Tursun, Memetjan Remutillan and Nurmemet Abidilimit were wanted over the murder of Jume Tahir, imam of China’s largest mosque, the Id Kah Mosque in the city of Kashgar.

The 74-year-old, who enjoyed a high reputation among Muslims nationwide, was killed at 6:58 a.m. on Wednesday after he finished hosting the morning ritual.

According to police, the three suspects, influenced by religious extremism, planned to “do something big” to increase their influence. [Source]

The murder of Jume Tahir comes days after a violent skirmish in nearby Shache County left anywhere between “dozens” and “about a hundred” dead or injured. Details of the attack remain in dispute, with Chinese authorities declaring the police shootings of perpetrators in a “premeditated and carefully planned” terrorist attack to be “in accordance with the law,” while overseas advocacy groups claim violence came only after police quashed a religious freedom protest. The violence in Shache, which Quartz notes is one of the poorest counties in China, was reported by state media over 24 hours after unverified accounts were being deleted from social media, and a Internet and SMS communications were reportedly blacked out in the region. These episodes are the latest in a series of recent attacks in Xinjiang blamed by the government on separatists and religious extremists. While recent attacks have security tightening in the long restive region, activists say that Beijing’s increasingly repressive policies are fueling unrest.

The Washington Post reports further on Jume Tahir and his controversial place in a community racked by tension between the government and the local, predominately Muslim, ethnic Uyghurs:

Tahir, 74, had led the 600-year-old Id Kah mosque in the city of Kashgar since 2003 and was a strong supporter of government policy on Islam that critics say imposes harsh restrictions on Muslims.

[…] Tahir’s high-profile support for the government — the report referred to him as a “patriotic religious personage” — and his criticism of violence in Xinjiang likely made him a target of the militants, whom the government says have ties to overseas Islamic terror groups.

[…] Tahir was frequently quoted in state media echoing government statements that Xinjiang was free of ethnic tensions and that “hostile forces in and outside China” were responsible for stirring up trouble.

“The people of all ethnic groups in Xinjiang are enjoying more and more rights and interests economically or politically,” he told state television during the 2010 session of the congress.

Tahir was seen as backing bans on the wearing of beards and headscarves by young Uighurs, as well as restrictions on mosque attendance and fasting. […] [Source]

While working on a report for AFP, Tom Hancock surveyed the spokesman for the DC-based World Uyghur Congress on the killing of Jume Tahir:

Depressing. Asked World Uighur Congress spokesman Dilxat Raxit if he would condemn the reported murder of a Kasghar Imam. He did not do so.

Meanwhile, China formally charged Ilham Tohti with separatism yesterday. The outspoken scholar, who has been in detention since January, is expected to soon stand trial on a charge that could, in theory, be punished by death. From Reuters:

Defence lawyer Li Fangping said prosecutors ignored written and verbal requests for court material and had not notified lawyers or family when the case was turned over to the court.

“They have not given us any formal response and they have not heard our legal defence opinions. They directly sent it to the Urumqi Intermediate Court. This is fundamentally a violation of law,” Li told Reuters.

[…] Li said if the court moved quickly, the case could be heard some time in August and it was unclear if he would be allowed to attend.

[…] “The decision to indict on such a serious charge a man like Ilham Tohti, who is known for trying to bridge divides, shows how far China’s human rights have deteriorated in the past months,” Sophie Richardson, China director at Human Rights Watch, said in an emailed statement.

“It sends precisely the wrong signal to Uighurs when tensions are at an all-time high.” [Source]