Inside China’s Escalating War on Terror 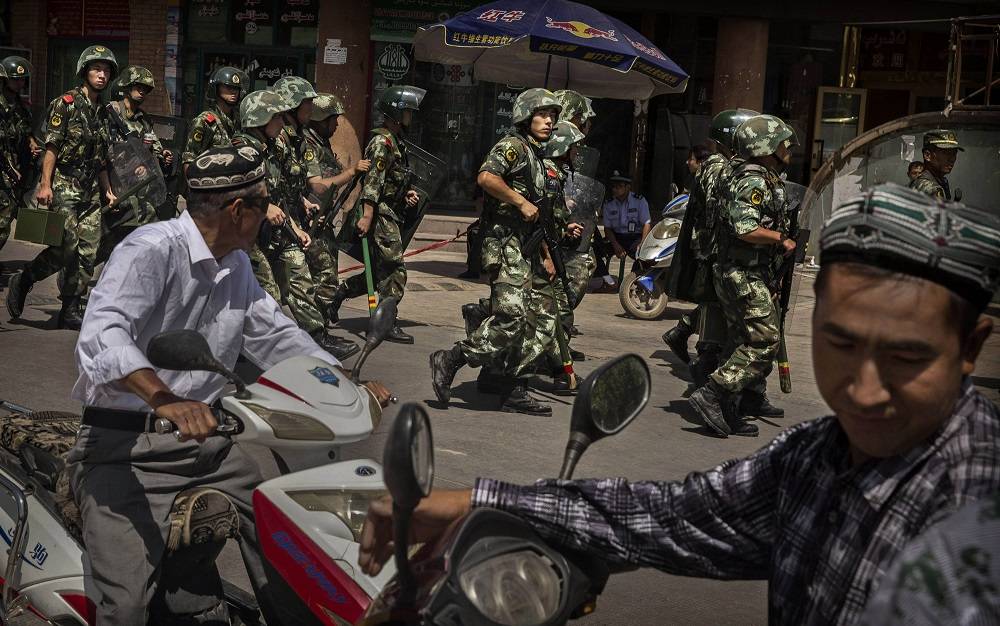 Amid Beijing’s “people’s war” against terrorism, The Globe and Mail’s Nathan Vanderklippe has published a feature from Xinjiang thoroughly outlining recent violence in the region, subsequent crackdowns that have largely singled out members of the Uyghur ethnic minority, and diverse local perceptions of the campaign:

The bloodshed [late last month] more than doubled the death toll from what had been – for two months – the worst act of terrorism ever committed on Chinese soil: 39 deaths May 22 at a market in the regional capital, Urumqi.

Beijing has responded swiftly and forcibly, spurred by President Xi Jinping’s pledge during a visit to Xinjiang just three weeks earlier to “make terrorists like rats scurrying across a street.” Declaring its own “war on terror,” the government radically restricted expressions of faith – including a ban on fasting (which is essential to Ramadan).

[…] “I feel like I’m in a battlefield in Iraq,” says Fa Te, a 21-year-old Uighur resident of Urumqi. Soldiers are “everywhere.”

Some Muslims, like many of Xinjiang’s ethnic Chinese residents, support the crackdown. They argue that an iron fist is necessary to maintain safety.

But the extent of the repression and violence being employed raises troubling questions about whether the real goal is to contain “extremists” or simply to crush the Uighurs, a minority that fits uncomfortably into Beijing’s vision of a singular “Chinese dream.” […] [Source]

The terror crackdown in Xinjiang has been steadily intensifying as violent incidents have continued to take lives in the region, and some commentators have argued that measures aimed at ethnic Uyghurs are working to exacerbate the problem. Following an article from the Global Times’ reportIng the use of drones in the apprehension of terror suspects [Chinese], an overseas advocacy group has criticized China for treating Uyghurs as “state enemies”:

An overseas Uighur rights organization has protested the Chinese government’s use of drones in a security crackdown in the ethnic group’s home region of Xinjiang, saying it would intensify tensions that have left dozens of people dead this year.

The Washington D.C.-based Uyghur American Association demanded in a statement Monday that Beijing fully disclose its deployment of drones in an area where Chinese media say a July 28 terror attack left 96 people dead, including 59 attackers who were shot by police.

“The domestic use of unmanned aerial vehicles is an extremely serious and disturbing development,” the association said, warning of an escalation in ethnic tensions. [Source]

Beijing has blamed recent acts of violence on religious extremism, and new regulations have been issued on religious activities. Reuters reports that several Xinjiang officials have been punished for their open religious practice:

China has reprimanded 15 Xinjiang officials for violations that include adhering to religious faith, state media said on Tuesday, amid a crackdown on what the government calls illegal religious activities in the unruly western region.
<p, the official Xinhua news agency said, behavior which violated rules that state workers not be religious.

[…] China punishes the study of Islam outside the confines of tightly controlled state mosques and children are prohibited from attending madrassas, prompting many parents who wish to provide a religious education to use underground schools. [Source]

Authorities have also pointed to economic inequality in Xinjiang—home to some of the poorest regions in China—as a major cause of unrest. The Telegraph reports on Beijing’s plan to launch an urbanization campaign amid the war on terror:

Dozens of new cities and towns will be built from scratch in China’s remote and restive far west as part of the country’s intensifying“people’s war” on terror, according to reports in the state media.

[…] “Measures such as creating jobs and improving education are seen as fundamental solutions to addressing the threat of terrorism.”

Many of the new cities and towns will reportedly be built by the Xinjiang Production and Construction Corps or XPCC – a state-run paramilitary organisation that controls large swathes of the western region, a sizeable agricultural empire and even its own university, courts and police force. […] [Source]